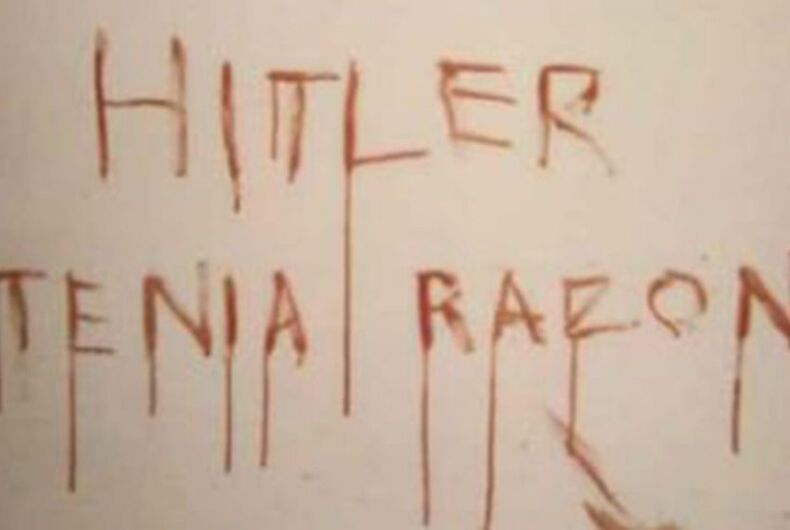 Police say a killer who stabbed a gay man to death in Barcelona, scrawled "Hitler was right" on the wall behind the body in the victim's blood.Photo: Mossos d'Esquadra

A suspect accused of murdering a gay man 18 years ago in Barcelona has finally been arrested in Columbia.

Authorities say the unnamed suspect used the victim’s blood to scrawl “Hitler was right” and “KKK” on the wall above the body. The suspect left a plastic yellow flower wrapped around the victim’s ear.

The 45-year-old victim was identified by police only as Vitervo A. V. He was stabbed to death.

The two men met via a sex ad in a local newspaper. After a night of drinking, the two went back to the victim’s apartment. A relative of the victim’s roommate found the body hours later.

The case went cold for years, but tidbits of information continued to leak in about the case. The victim’s family reported flowers showing up on his grave that hadn’t been put there by them.

And then someone called the victim’s cousin and played a recording of what sounded like the victim pleading for his life for her. While the call provided some more information, the case went cold again.

The second investigation into the phone call had provided some clues and when a judge ordered the case reopened for a third time in 2016, authorities used modern technology to start piecing together who was responsible.

Eventually police focused on the suspect, who had a history of sexual aggression accusations and had fled Spain in 2009. Using phone records from the apartment, authorities tracked the calls to the sex ad phone number and then further to a house where the suspect was staying when the murder occurred.

They say people who knew the suspect at the time told them he believed in Nazi ideology and had boasted about killing “a homosexual in Barcelona.” The suspect was married to a woman when he allegedly killed the victim.

Currently he sits in a Colombian prison awaiting extradition to Spain.