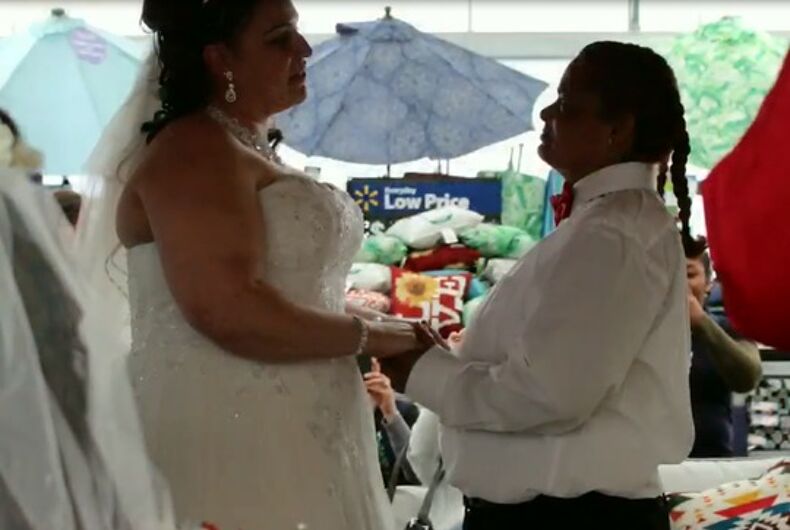 A Pennsylvania couple had an unusual wedding venue this weekend: the garden section at Walmart.

In 2015, Chrissy Slonaker Torres and Leida Torres met at the Walmart in West Manchester Township, where they both work. Chrissy said that she was afraid to get into another relationship after her first marriage ended badly, but Leida didn’t give up.

“One day when it was snowing, she asked if I could come pick her up since I have a truck,” Chrissy said. “When she got in the truck, she said, ‘So, are you going to go on a date with me?’”

They decided to get married last December. “I found my soulmate, finally,” Leida said. “She’s the love of my life.”

At first, they were planning a private ceremony in their home. But as they started sending out invitations, they realized that many of their co-workers at Walmart wouldn’t be able to get time off work to attend.

“We both have a lot of really close friends that we call family in our Walmart store,” Chrissy said. “We discussed it with the store manager and the home office so that everybody in our store – everybody that we share our lives with – can be a part of the wedding.”

That’s sweet – until you realize that their underpaid and overworked friends couldn’t get the time off to witness their wedding. Walmart provides notoriously bad working conditions and settled a class action lawsuit alleging anti-LGBTQ workplace discrimination for millions of dollars.

This past Saturday, they put an outdoor tent in the middle of the garden section and rolled out a rug. They decorated it with flowers and surrounded it with patio furniture.

“There were some customers that were going around saying ooooh and ahhh, and that was so sweet,” Chrissy said. “You could hear it in the background. I didn’t hear anything negative.”

And the two got married. “It sunk in when we were doing the vows that this is forever. This is unconditional,” Chrissy said.

Mandy Hershey, a customer who just happened on the wedding, posted a picture online. It went viral, and the couple said that they received negative comments like that they “can’t afford a wedding” and that they’re “rednecks.”

“You shouldn’t judge something by the way it looks because there could be a beautiful story behind it,” Chrissy said. “We met in Walmart, we fell in love at Walmart. We could’ve gotten married any other place, but we chose to get married at Walmart.”

“Everyone was so thrilled,” she added about the people who actually went to their wedding. “They supported us 100 percent on it. They felt blessed that we chose to do it at the store just to have our special day with them.”