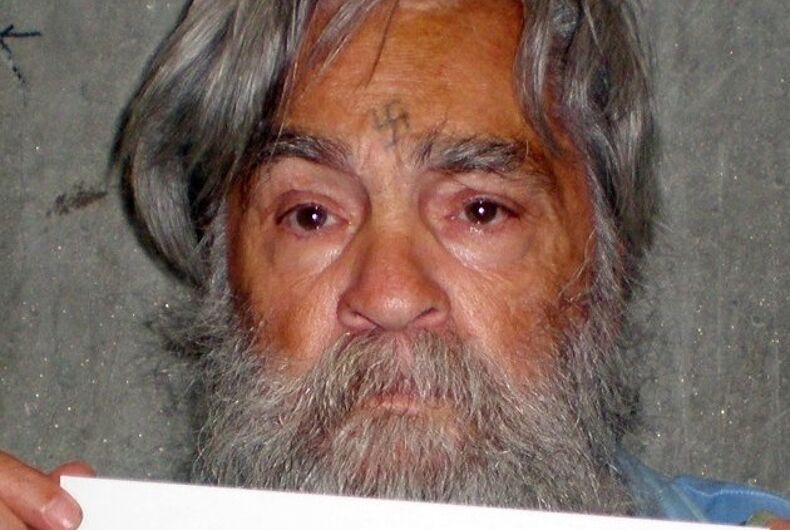 A church that really doesn’t like LGBT people just held a funeral for convicted murderer and cult leader Charles Manson.

The Porterville Church of the Nazarene in California, known for its anti-LGBT rhetoric, held a quiet funeral service for Manson this past Saturday.

“This is the same church that has, for years, been solidly against marriage equality and LGBT rights,” wrote Jim Reeves in the Visalia Times Delta. “I’ve watched a few of their YouTube videos of Sunday sermons when LGBT issues were mentioned, and it astonishes me the ignorance, falsehoods, and nonsense I’ve heard spoken from that pulpit.”

Manson died this past November in prison. There was a legal battle over his remains that went on for several months, which his grandson Jason Freeman won.

Freeman looked for a funeral home and a church for a quiet service. They were referred to the Porterville Church of the Nazarene, and the church agreed to provide a funeral for Manson.

Only invited guests were allowed, since Freeman didn’t want protestors or supporters to demonstrate.

In the late 1960’s and early 1970’s, Manson ran a cult called the Manson Family. Using a mix of Satanism, Christianity, and Scientology, Manson presented himself as Christ to his followers.

The cult committed a number of brutal crimes, including murder. In 1971, he was convicted on seven counts of first-degree murder and one count of conspiracy to commit murder.

He spent the rest of his life in prison and committed more crimes there. He was also racist, was paranoid about a revolution of Black people, and carved a swastika on his forehead.

The church may have felt it had a duty to give anyone funeral rights, even someone as awful as Manson. It may have been an act of radical equanimity.

On the other hand, it’s hard to see the church as really valuing basic respect to all people considering their rhetoric on LGBT people.

In the end, they appear to be saying that Charles Manson is more welcome there than someone who’s LGBT.

These women got married at a Walmart