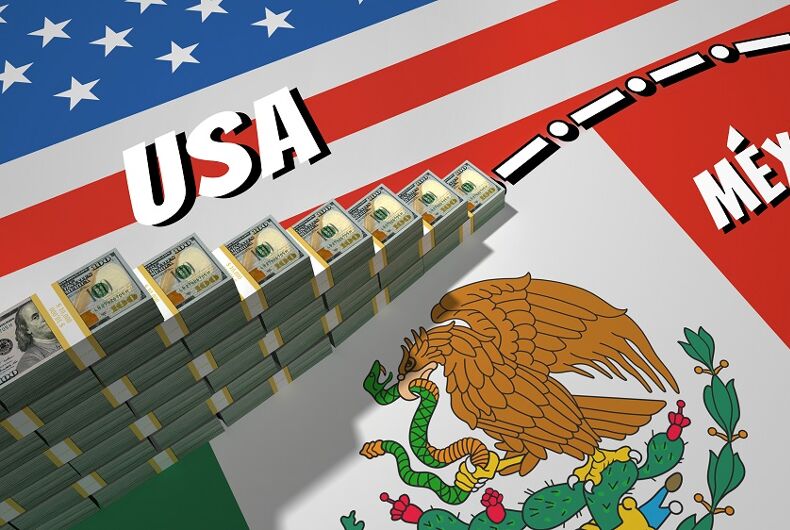 Donald Trump is privately discussing the idea of making the military pay for a wall between the U.S. and Mexico.

Trump has long used the cost of transgender people’s health care as a justification for banning them from the military, even though it would cost far less than 1% of the price of the border wall.

The Washington Post reports that Trump has brought up the idea of the military paying for the wall several times with advisers, including Defense Secretary James Mattis.

He also discussed the idea in a private meeting with House Speaker Paul Ryan last week, according to three unnamed sources. Trump brought up how the the omnibus spending bill he signed last Friday only allocates $1.6 billion for “fencing and levees” on the border, a fraction of how much it will cost to build a wall and restricted in its purpose. So he suggested taking the money from the military’s budget since the border wall is a “national security” issue.

The omnibus spending bill assigns specific purposes for dollar amounts. Repurposing funds would require Congressional authorization, so Trump will need to get Ryan on board.

The sources said that Ryan did not react to Trump’s idea.

The Department of Homeland Security estimated that the wall would cost almost $22 billion to build. The Trump Administration is seeking $25 billion for the wall. And Senate Democrats estimate that it will cost around $70 billion to build it. None of these estimates includes the billions needed for yearly maintenance.

Compared to the wall, though, health care for transgender people in the military is a bargain. The RAND Institute used private insurance data to estimate the cost at $2.4 to $8.4 million annually.

That’s 0.0034% to 0.038% of the price of building the wall. If Trump were truly concerned about the military’s budget, he would not be suggesting taking tens of billions of dollars out of it for a wall.

During his campaign, Trump repeatedly promised that Mexico would pay for the wall.

When Mexico said that it would not pay for it, Trump responded, “The wall just got ten feet higher.”

A senior official for the White House confirmed that they are looking for alternative ways to pay for the wall. “There’s a lot of different options we’re trying to contemplate. Certainly that’s one,” they said.

Christian leader says Jesus was ‘advocating for the 2nd Amendment’