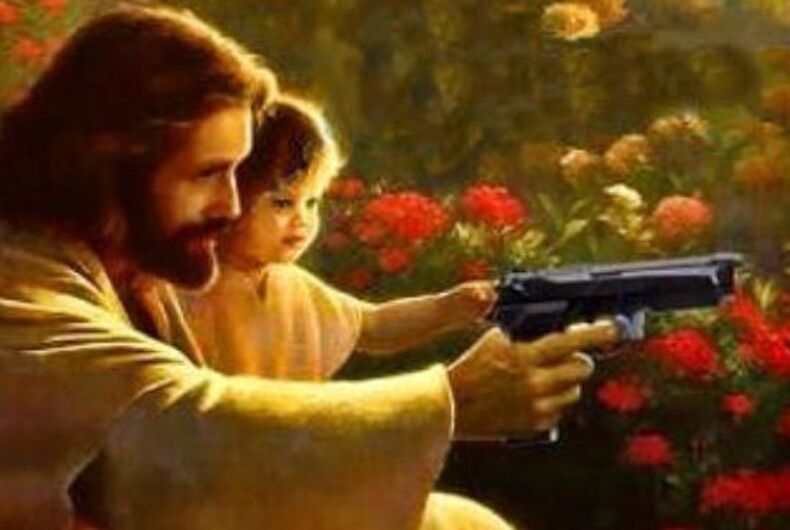 Matt Barber, the former policy director of the Concerned Women for America, said that Jesus supported the right to bear arms.

The only problem? The Bible passage he quotes isn’t about Jesus telling people to arm themselves – Jesus was presenting a parable about Satan.

Barber was on American Family Radio earlier this week, talking about guns.

Since Jesus isn’t known for advocating war and violence, Barber had to search a bit to find a passage in the New Testament that was pro-gun. So he turned to Luke 11:21: “When a strong man, fully armed, guards his own house, his possessions are safe.”

“Think about that. There’s Jesus advocating for the Second Amendment, the right to keep and bear arms, to defend your own house, to keep your possessions, not to mention your wife, your children, to keep them safe,” Barber said.

Except reading the entire passage (Luke 11:14-26) shows that it’s a parable in which the “strong man” is Satan. Jesus is clearly not telling people to get armed.

The passage Barber quotes is only the first part of a sentence. The full sentence is: “When a strong man, fully armed, guards his own palace, his goods are safe; but when one stronger than he attacks him and overcomes him, he takes away his armor in which he trusted and divides his spoil.”

Or as minister Matthew Henry described the passage in his classic Exposition of the Old and New Testaments: “The heart of every unconverted sinner is the devil’s palace, where he dwells, and where he rules. There is a kind of peace in the heart of an unconverted soul, while the devil, as a strong man armed, keeps it.”

So that’s the religious right in 2018: misinterpreting the Bible to make Jesus seem like a gun enthusiast.