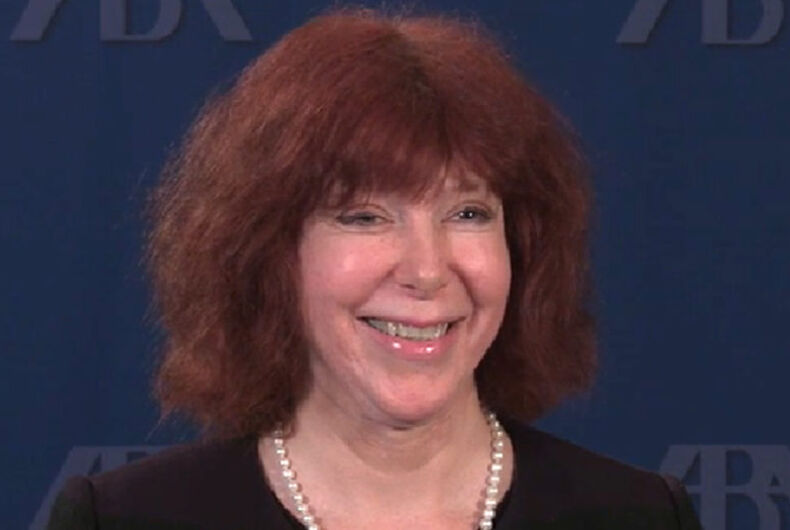 A high ranking lawyer in the Department of Justice is quitting to join Lambda Legal in the fight for LGBTQ rights.

Diana Flynn, a transgender woman who has been with the DOJ since the Reagan administration, told BuzzFeed News she is leaving to take the position of litigation director for the civil rights organization.

Lambda Legal is one of the litigation groups that has taken the Trump administration to federal court, successfully challenging his transgender military ban. The Trump administration unveiled its latest version of the ban on Friday, and it is likely Flynn will be put in the unusual position of standing in opposition to her former colleagues from a job she said she “never really expected to leave.”

“If I find myself on the opposite side of the courtroom from someone I had worked with, it would be something different,” she said. “It would be strange, but it’s something we could deal with.”

“There have been some good times in the Civil Rights Division, regardless of the party,” Flynn, who has served chief of the Justice Department’s Civil Rights Division Appellate since the 1980s, recalled. “But it appears to me — at this crucial time for LGBT rights — to make the arguments I want to make and take positions I want to take, I would be much better situated at Lambda Legal than I am at Justice.”

“I see a danger to some of the principles that have been established in the civil rights arena generally,” she said, declining to comment on specific actions taken by the Trump administration. “I see attempts to roll back specifically LGBT rights in the courts and society, and I want to be in the position where I can aggressively resist that and make the arguments that I think will be most effective.”

The DOJ under Trump and Attorney General Jeff Sessions have argued employers should be able to discriminate against LGBTQ people, based on religious beliefs, reversed an Obama-era policy that Flynn helped bring about that said transgender individuals were protected against sex discrimination under Title IV.

It has also argued on the side of baker Jack Phillips, who brought his case before the Supreme Court, arguing that being made to make a cake for a same-sex wedding would violate his First Amendment rights to free speech.

Meanwhile, the Department of Education has said it won’t hear transgender students’ complaints of sex discrimination concerning bathroom and locker room use.

“You are seeing a brain drain out of the DOJ that is not normal, and it is a reflection of how aberrant this attorney general has been, with not only reversal of positions but targeting of communities,” said Sharon McGowan, the strategy director of Lambda Legal, and herself a former principal deputy chief of the Appellate Section at DOJ’s Civil Rights Division. “From the first day Sessions came to the DOJ, he has been dismantling decades of work that Diana Flynn had been doing.”

“With this administration devolving further into chaos, it comes as no surprise that the administration continues to lose incredibly talented attorneys like Diana,” said Vanita Gupta, the former head of DOJ’s civil rights division under Obama.

The American Bar Association Commission on Sexual Orientation and Gender Identity honored Flynn with its Stonewall Award last year. A video of her speaking on the progress she helped bring about and watch take shape during her tenure at the DOJ follows.

Flynn will begin her new job with Lambda Legal in May.