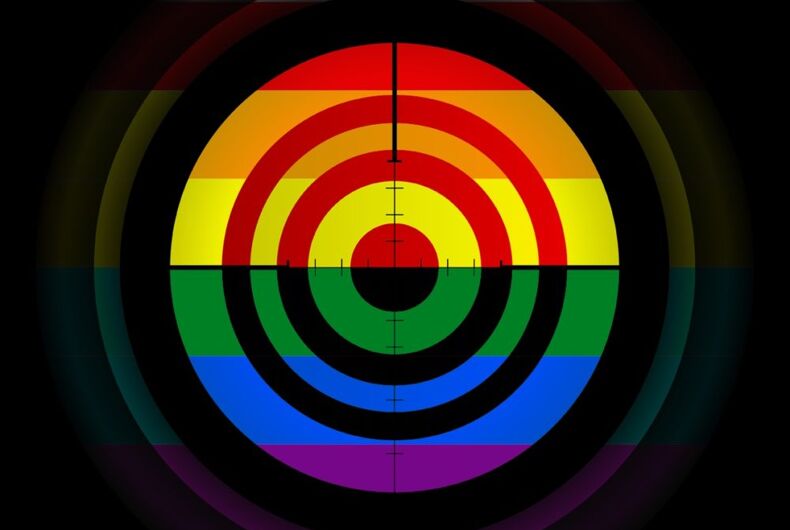 The LGBTQ community is in the crosshairs

Matt Barber, the head of Christian Civil Rights Watch, has announced that he will publish a hit list of progressive LGBT organizations and activists that a religious zealot or domestic terrorist could use to attack the community. He says the list will only include “anti-Christian extremists.”

Barber has been associated with the Christian legal group that represented disgraced Kentucky clerk Kim Davis, Liberty Counsel, for years. Not only was the organization’s Director of Cultural Affairs, he left that position to lead their lobbying arm. Barber co-hosts a daily talk radio show with the extremist group’s founder and chairman, Mat Staver.

Both Barber and Liberty Counsel have been waging an ongoing campaign against the Southern Poverty Law Center (SPLC) after the esteemed civil rights organization officially listed Liberty Counsel as an anti-LGBTQ hate group. Barber, however, has shockingly announced the new tactic in his war to delegitimize the not-for-profit extremist group monitors.

Together with several other Christian hate groups, Liberty Counsel and Barber have waged war against SPLC and their listing of hate groups active in the United States. The Family Research Council and the American Family Association are also on the list.

When the nonprofit rating service Guidestar announced they would be including a warning on certain “charities” that they have been designated a hate group, the groups sent their follower into a frenzy after accusing it of “anti-Christian bias.”

Together the three organizations have decried SPLC’s list of hate groups, blaming it for the man who walked into the Family Research Council and shot a security guard. While the gay domestic terrorist said he attacked due to the group’s ties to fast food chain Chick-fil-A, the religious right organizations have seized on one small bit of the shooter’s statement where he said he knew Family Research Council was on SPLC’s hate group list and had visited their website.

To prove the point, Barber will create his own list of potential targets, but instead of white supremacists, vociferously anti-LGBTQ groups, and anti-Semitic activists, he will highlight “anti-Christian extremists.”

“At Christian Civil Right Watch, we want to be aggressive,” Barber said in a recent interview with radio host Audrey Russo. “We want to out-Alinsky the Alinskyites. These are Saul Alinsky-type tactics. We have come up with and are building a comprehensive report and interactive map kind of akin to what the Southern Poverty Law Center is doing with their so-called hate groups. We’re detailing and itemizing anti-Christian extremists groups, with the Southern Poverty Law Center, of course, topping the list of these groups.”

Related: Kim Davis will face the man she denied a marriage license in the next election

“Now people say, ‘Aren’t you just doing exactly what they’re doing, isn’t this dishonest?’” Barber continued. “No, that’s the difference. What they’re doing is dishonest, it’s not rooted in truth. What we’re doing, we provide evidence, we provide the facts, we provide examples of their anti-Christian extremism, whereas the Southern Poverty Law Center, it’s all ad hominem, they don’t have any evidence because there is none.”

Barber’s list, however, uses religious bigotry to target the LGBTQ community specifically and history is full of good examples why it’s so dangerous. From the Crusades to the Inquisition, “disrespect” for Christians has been one of the leading causes of murder, war, and torture since the religion was established. The Nazis wrote out lists of Jews to make sure Germans knew they weren’t Christian.

No one has been murdered because they led white supremacist groups or championed anti-LGBTQ causes. Instead, queer politicians like Harvey Milk have been assassinated, gay bars have been bombed and set on fire by religious extremists, and fundamentalist Christian ministers call for the execution of LGBTQ people.

Barber isn’t just playing with fire. He’s soaking everything in gasoline before he lights the match.

Meanwhile, the Liberty Counsel continues to advocate for a Christian’s license to discriminate against LGBTQ people. It’s not hard to see the connection.

Who hung an antigay banner on this Catholic Church?