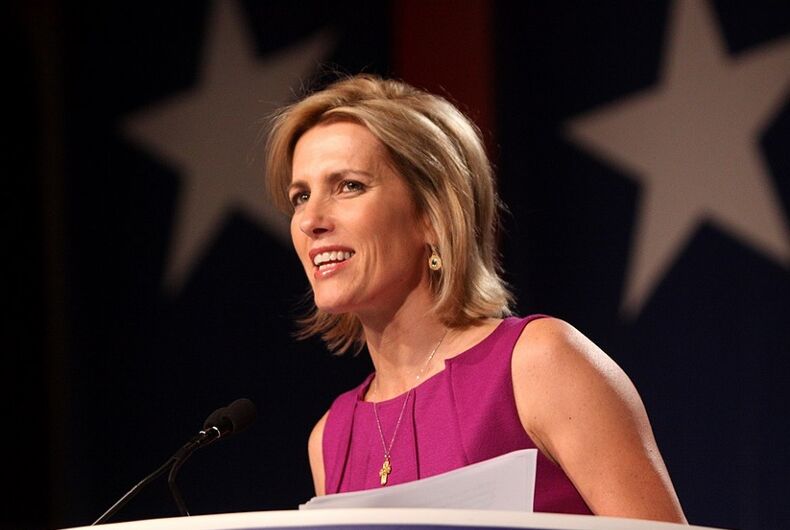 Fox News host Laura Ingraham is among those on the right who somehow believe it is justified and wise to mock teenagers who are still reeling from the mass shooting at their school in Parkland, Florida.

Ingraham took to Twitter to bully survivor David Hogg, who has emerged as one of the key leaders in the movement against gun violence that has come out of the tragedy, over the fact that he has been rejected by some colleges, despite his high GPA and solid SAT scores.

David Hogg Rejected By Four Colleges To Which He Applied and whines about it. (Dinged by UCLA with a 4.1 GPA…totally predictable given acceptance rates.) https://t.co/wflA4hWHXY

After Ingraham accused Hogg of “whining,” he reminded her that messing with teenagers over social media, especially when they have a huge portion of the country behind them, is one of the dumber moves an older person can make.

Hogg took to Twitter himself to ask a question “for a friend” about her advertisers, with a hashtag calling for a boycott. He then went about tweeting out the list of her biggest advertisers himself, instructing his followers to contact the companies.

Soooo @IngrahamAngle what are your biggest advertisers … Asking for a friend. #BoycottIngramAdverts

Pick a number 1-12 contact the company next to that #

It is already working, as Rachael Ray’s pet food brand Nutrish has announced it is severing ties with Ingraham, as is TripAdvisor, Expedia, and Wayfair.

We are in the process of removing our ads from Laura Ingraham’s program.

Ingraham has already gone on damage control, apologizing for “any upset or hurt my tweet caused (Hogg) or any of the brave victims of Parkland.” She then took the time to pat herself on the back for having him on her show, and being nice to him at the time.

Any student should be proud of a 4.2 GPA —incl. @DavidHogg111. On reflection, in the spirit of Holy Week, I apologize for any upset or hurt my tweet caused him or any of the brave victims of Parkland. For the record, I believe my show was the first to feature David…(1/2)

… immediately after that horrific shooting and even noted how "poised" he was given the tragedy. As always, he’s welcome to return to the show anytime for a productive discussion. WATCH: https://t.co/5wcd00wWpd (2/2)

The incident has also brought back to light Ingraham’s past of outing LGBTQ college students during her time as the editor of The Dartmouth Review. She has since apologized for that in a 1997 essay for The Washington Post, noting the impact watching her gay brother dying of AIDS had on her.

ProPublica‘s Jessica Huseman took the opportunity to issue a “small reminder” on the matter. Both Hogg and Emma Gonzalez, who is bisexual, retweeted Huseman.

Small reminder that when she was a college student Laura Ingraham sent a student reporter under cover to out people at Dartmouth. https://t.co/SussiK31g3 pic.twitter.com/UQmdiw4Z5K

As the president of MSD’s GSA and also as a Human Being, this disgusts me to my core @IngrahamAngle You aught to be Ashamed https://t.co/ZWZH3Wj3Ta

The NFL just got its first male cheerleaders