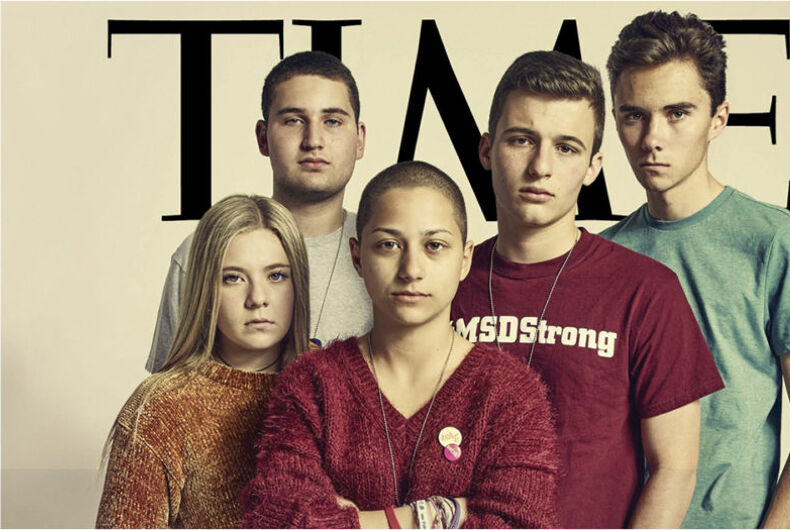 Survivors of the Parkland shooting who have emerged as leaders in the fight for gun controlPhoto: Time

I must admit when I heard the first murmurings in the immediate aftermath of the Parkland shooting suggesting that this would be the tragedy to finally usher in real gun control legislation in this country, I was skeptical. To say the least.

I even made my old man cynicism publicly known, posting a snarky Facebook status pointing out that the same people who are saying these kids will bring gun control to America were saying the LGBTQ community would accomplish that feat, utilizing our organizational abilities and resources, following the Pulse nightclub shooting.

But that was before I got to see “these kids,” rather these impressive young adults, in action. That was before I watched as they delivered articulate, impassioned speeches that gave me goosebumps. It was before watching them boldly ask tough questions of politicians they let know owe them everything (not the other way around). It was before I saw that they, having grown up on the internet, brush trolls off their shoulders like so much silly, archaic dust.

My cynicism was again challenged when they successfully organized a nationwide school walkout, on the one month anniversary of the shooting, with the March For Our Lives demonstrations to follow tomorrow, with people taking part all around the world to bring even greater attention to the cause of ending gun violence.

Speaking of attention, check out the cover of Time magazine.

The only walkouts I was a part of in the aftermath of Columbine were the result of the numerous bomb threats made against my high school, in Western New York, most likely from my fellow classmates hoping to get out of a test.

Hardly any gun control legislation was successfully passed in the wake of Columbine. Marilyn Manson’s career took a harder hit than gun sales.

This time, I have to admit, things feel different. This time it seems like real change might be possible.

Already state governments are already responding, including Florida, which banned bump stocks, raised the age to buy a firearm to 21, and instituted a three-day mandatory waiting period.

The federal government is also taking note of the changing tide of public opinion.

Earlier this month, the Department of Justice submitted a notice to the Office of Management and Budget saying federal law should be changed to ban the possession, sale or creation of bump stocks.

Additionally, the Associated Press reports congressional aides said a measure intended to improve the federal background check system has been included in the government spending bill.

The NRA has had to sit and watch as companies desert them, gun owners begin turning into police and even destroying their weapons, and for the first time in two decades, most people report having a negative view of the organization. Suddenly their outsized influence over politicians, who are hungry for money, sure, but are just as hungry for votes, is in serious question.

And all of this has happened in just over a month.

As their chant states, these kids are calling b.s., and they aren’t here for any of yours, be you troll, lobbyist, politician, or otherwise.

I’ll tell you one thing for sure, I wouldn’t want to mess with them. They’ve already made me eat crow for doubting, a mistake I won’t soon make again.

Watch below as students walk out of Columbine High School as part of the National Walkout Day demonstrations on March 14.

Visit the March For Our Lives website to find a march near you.