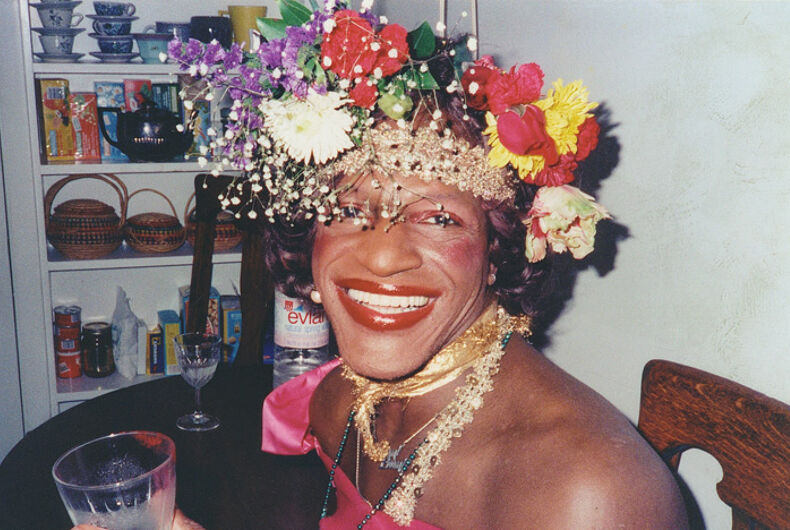 Yesterday, on International Women’s Day, The New York Times remembered 15 “remarkable women” for whom they had failed to publish more timely obituaries. Transgender activist and entertainer Marsha P. Johnson was among those remembered at long last.

But, frankly, they could have, and should have, done much better at finally remembering her.

Johnson is remembered for her activism in the early gay rights movement, both before and after the Stonewall Uprising, modeling for Andy Warhol, performing with Hot Peaches, and advocating for the poor and homeless, including founding, alongside her friend and fellow activist Sylvia Rivera, Street Transvestite Action Revolutionaries (STAR) to get trans people off the streets.

She is also remembered for her work with the AIDS Coalition To Unleash Power, or ACT UP, to fight for awareness and care for those living with the disease during the height of the epidemic.

Johnson died in 1992, at the age of 46, her body found in the Hudson River, with police ruling it a suicide. The mysterious circumstances surrounding her death led many to believe she might have been killed, a theory that has gained more traction in part thanks to the documentary The Death and Life of Marsha P. Johnson, released on Netflix last year.

Police reclassified her death as a drowning from undetermined causes later in 1992, and in 2012 reopened the case. It remains open to this day.

“Marsha P. Johnson could be perceived as the most marginalized of people — black, queer, gender-nonconforming, poor,” Susan Stryker, an associate professor of gender and women’s studies at the University of Arizona, told The New York Times.

“You might expect a person in such a position to be fragile, brutalized, beaten down. Instead, Marsha had this joie de vivre, a capacity to find joy in a world of suffering. She channeled it into political action, and did it with a kind of fierceness, grace and whimsy, with a loopy, absurdist reaction to it all.”

Now onto the bad…

While the piece is strong in many places, and is a decent primer for those unfamiliar with the legend of the LGBTQ community, it is harmed by how much it leans into representing her life as a sex worker to the point of feeling sensationalist, particularly considering this is an obituary.

In fact, it’s so central to the obituary, the fifth word after her name is “prostitute.” It begins:

Marsha P. Johnson was an activist, a prostitute, a drag performer and, for nearly three decades, a fixture of street life in Greenwich Village. She was a central figure in a gay liberation movement energized by the 1969 police raid on the Stonewall Inn. She was a model for Andy Warhol. She battled severe mental illness. She was usually destitute and, for much of her life, effectively homeless.

Her battles with mental illness, and her tendency to at times get confrontational, are also well accounted for, and at times it feels heavy-handed.

To be clear, sex work, especially done as a means to survival, is not something to be ashamed of, nor is mental illness. Yet the way it is presented, the fact that it leads the entire obit, is questionable if not downright problematic.

Johnson isn’t the only one that gets the tabloid treatment, either.

Dianne Arbus’s obituary leans heavily on the exact details of her suicide, the controversy over her work photographing, as they put it, “circus performers, transvestites, mentally disabled people and others,” as potentially exploitative, and begins by calling her “a daughter of privilege.”

The publication seems to take a similar glee in kicking off Sylvia Plath’s belated obituary by describing the details of her suicide, writing:

“She made sure to spare the children, leaving milk and bread for the two toddlers to find when they woke up. She stuffed the cracks of the doors and windows with cloths and tea towels. Then she turned on the gas.”

Is this really how The New York Times wants to honor these, as it calls them, “remarkable women,” after failing to do so in a more timely matter, by writing in paperback thriller style?

It’s great they finally got its act together enough to cover the passing of these influential and brave women, but maybe next time be less sensationalist about it. It would make for a much more fitting tribute.

Why is it so hard to forgive Republicans’ past anti-LGBTQ statements?

The South needs PrEP the most, so why are the fewest prescriptions written there?