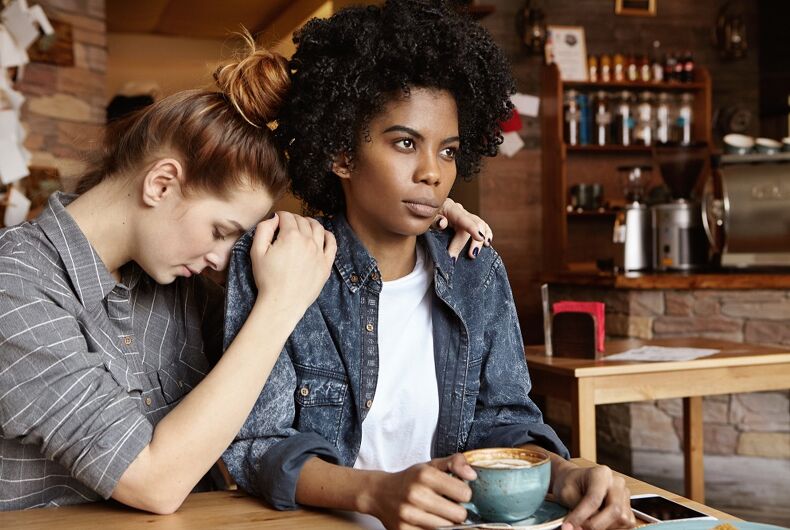 Illinois attorney general candidate Erika Harold is facing allegations that she once said that it would be better if abusive parents adopted a child than if a same-sex couple did.

In 2000, Harold participated in the Miss Illinois pageant. Several sources told NBC 5 that she was asked about same-sex adoption in the interview part of the competition.

Harold was asked, if she were a social worker, would she place a child with a loving same-sex couple or a straight couple who were known child abusers?

She picked the child abusers, according to several people who were there.

“I remember it because it was so shocking,” said one of the pageant officials. “She took some time to answer it. And that drew people in. It stopped the room.”

“It said a lot about her, she spoke about reading the Bible daily and said her beliefs could not subject a child to the gay lifestyle.”

The Harold campaign released a statement saying that she does not remember the exchange (she was 20-years-old at the time) but that she “certainly support[s] same-sex adoption and foster care placement.”

Old comments come back to haunt another candidate

In California, John Cox is running for governor. In 2007, he attacked gay and transgender people at the Value Voters Summit, a yearly meeting of conservative Christian leaders.

While discussing the “homosexual agenda,” Cox said that transgender people shouldn’t be teachers.

“We also have this problem with transvestites who want to be school teachers,” he said. “What the Republican Party needs to stand for is school choice and home-schooling, so that we can keep our children in the schools of our choice, and we won’t have to deal with that.”

He then compared homosexuality to bestiality.

“We certainly need to stand up for the proper behavior, we absolutely need to do that, but we need to use common sense, and talk about the fact that we can’t open the floodgates to polygamy and bestiality and all kinds of other things. Kids, hold your ears.”

The statements resurfaced a month ago, and Cox said that his views have changed. “My views have evolved over the last decade. I concluded that it was inconsistent with my support for individual liberty, limited government and the right to privacy.”

Major Democrats have “evolved” too

In the 2008 presidential primaries and election, both candidates Barack Obama and Hillary Clinton said that they opposed marriage equality, although neither of them made inflammatory statements like Cox or Harold did.

Obama said that “God’s in the mix” when asked at the Saddleback presidential forum about marriage equality.

At the HRC/Logo presidential debate in 2007, Clinton was more restrained. “I prefer to think of it as being very positive about civil unions,” she said, when asked about marriage equality.

Both politicians have come out in favor of marriage equality since then.

Forgiveness follows a process, not a period of time

“When someone commits an act that harms another, the balance of the whole community is disturbed,” ecofeminist and Spiral Dance author Starhawk wrote. “To restore the balance, a healing process must take place.”

“Forgiving the wrongdoer is the last stage in that process.”

The first condition that must be met for forgiveness is for the harm to stop. “The hurtful actions must cease[…] before forgiveness is appropriate.” When it comes to politicians discussing LGBTQ issues, this means that they have to stop attacking.

The second is condition is acknowledgement, being willing to “listen to the effects of their actions,” according to Starhawk.

This is followed by an expression of regret or an apology. Politicians rarely apologize for their former beliefs, but they can express regret.

The fourth and final condition is making amends. “The wrongdoer must accept responsibility and do whatever he or she can to alleviate the harm, repair the damage, restore what has been taken or destroyed,” Starhawk says.

Is it time to forgive Cox and Harold?

Clinton and Obama, by all appearances, have been forgiven by LGBTQ people for their past statements. Republicans often hold them up as examples of homophobia among Democrats, and they ask how they can be forgiven while Republicans are generally not.

But forgiveness is about more than changing one’s views. What someone has done also matters.

While Cox has focused on taxes in his 2018 campaign, he is a Republican candidate in California. The platform of the California Republican Party says “it is important to define marriage as a union between one man and one woman.” The platform does not support anti-discrimination legislation but does attack “baseless and overly burdensome litigation.”

Cox’s statement did not acknowledge the harm that his past statements did to LGBTQ people. Instead, he just said that his views were “inconsistent.”

And instead of making amends – he could have, for example, denounced his primary opponent’s transphobia… or denounced the California Republican Party’s platform – Cox has remained silent on LGBTQ issues outside of his short statement.

Harold, the Illinois attorney general candidate who is accused of saying that foster children should be placed with child abusers instead of same-sex couples, is an Illinois Republican.

The Illinois Republican Party’s platform advocates a constitutional amendment to ban marriage equality and says that “the ideal environment for children is within a two-parent family based on the principle of marriage between one man and one woman.”

The platform discusses how heterosexual couples are better than same-sex couples for two full paragraphs, and even goes so far as to give conversion therapy a nod, advocating the “right of parents to consent to health care involving their minor children,” “regardless” of what condition is being treated.

Like Cox, Harold has not said that her state Republican Party’s platform does not represent her views.

Harold has not expressed any regret for her statements or attempted to make amends. Her statement said that she didn’t remember her comments, but if she did make them, they were made almost two decades ago and they’re coming out “twelve days before an election.”

“An apology is not, ‘Why are you making such a big deal about this?'” Starhawk says.

Obama and Clinton have made amends

While conservatives like to point to Obama and Clinton as examples of Democratic politicians who once expressed homophobic views, their cases are different from Republicans’ because they are no longer engaging in their harmful behavior. The Democratic Party’s platform does not advocate second-class status for LGBTQ people and neither politician has recently made anti-LGBTQ statements.

They have also both expressed regret for their past statements after having listened to LGBTQ people for years.

When it comes to making amends, Obama enacted several pro-LGBTQ policies in the federal bureaucracy, helped end Don’t Ask, Don’t Tell and the transgender military ban, appointed two Supreme Court justices that ruled with the majority in Obergefell, and even awarded the Presidential Medal of Freedom to Ellen Degeneres for bravely coming out in 1997.

Clinton denounced LGBTQ human rights abuses in other countries when she was Secretary of State and advocated equal rights in her 2016 presidential campaign.

It would not be difficult for Cox and Harold to take similar steps, to denounce their parties’ platforms and to advocate for LGBTQ rights at the state level as much as Obama and Clinton did at the federal level. They have chosen not to, and forgiveness would be inappropriate at this time.