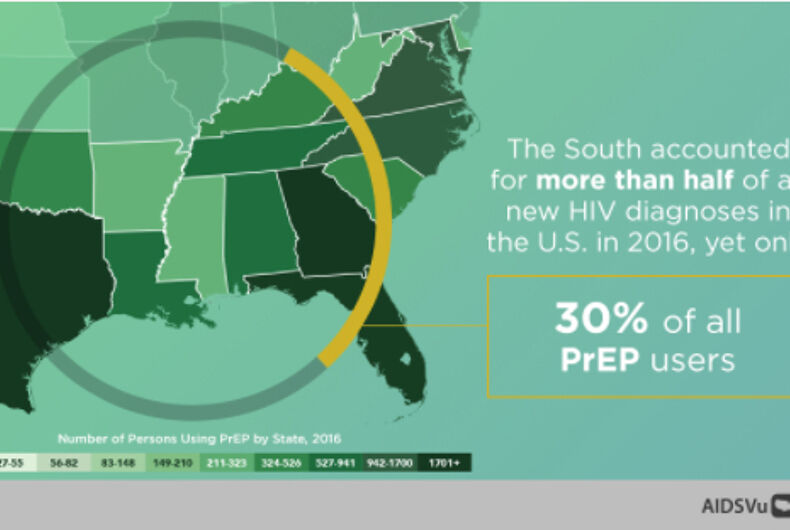 Only 5 percent of the 1.2 million persons indicated for PrEP are receiving it, with southern states showing the greatest disparity between need and use.

Those are among the key findings from researchers at Emory University’s Rollings School of Public Health, in Atlanta.

Emory research says that while PrEP use has increased, its use in southern states has not kept pace with new HIV infections.

The Emory group produces AIDSVu.org, which shares Emory’s HIV and PrEP research with the public, in partnership with Gilead Services. AIDSVu also offers an interactive map of PrEP use by state. (From the main map, go to the state view, and then select the PrEP option.) It also offers PrEPLocator.org, which helps you identify services in your community.

Related: CDC: We’re not getting PrEP to the men who need it

“PrEP is a revolution in HIV prevention and has the potential to dramatically reduce new HIV infections,”said Patrick Sullivan, professor of epidemiology at Emory and principal scientist for AIDSVu. “However, significant disparities in the use of PrEP exist across the country.

“Expanding access to PrEP is a core component of Getting to Zero campaigns in cities and states across the country and is one of four key focus areas in the National HIV/AIDS Strategy.”

Yet its state-level maps show that nearly 50 percent of all users in 2016 were in just five states — New York, California, Florida, Texas and Illinois.

Narrow that to per capita use, and the highest-ranking states were New York, Massachusetts, Rhode Island, Washington and Illinois.

The South accounted for only 30 percent of all PrEP users, yet it had more than half of all HIV diagnoses in 2016.

The lowest levels of active prescription prevalence were in the center of the country — Kansas, Missouri and Nebraska.

Aaron Siegler, research assistant professor of epidemiology at Emory, linked the disparities to race and to locations with expanded Medicaid.

“As a country we need to keep making PrEP more accessible, more available, and have interventions and programs to facilitate that. But, we have to remember that PrEP may not be reaching the groups most in need and as we work to expand PrEP uptake, we also have to make sure that we are reaching these disadvantaged groups.”

Why is the South, most affected by HIV, also the lowest in PrEP use?

Damon Jacobs, a therapist and HIV-prevention specialist in New York, said the first problem is stigma and ignorance from the medical community.

“There is a lot of shaming, finger-pointing and anti-sex misinformation that physicians are providing to patients,” Jacobs said. “In these communities, poor medical science is being disseminated amongst people at high risk for HIV who could benefit from learning about PrEP the most. This only further alienates people and reinforces the distrust of the medical community that has existed in these southern regions throughout history.”

Jacobs, who has shared his own use of PrEP, said accessibility was also a key issue. “Clinics have limited hours of operation,” he said. “They can be insensitive to patients and inflexible in their schedules. The populations disproportionally impacted by the HIV epidemic may have long work days and long commutes on public transport.

He said we need to train physicians and to collaborate across the medical community.

“When information is shared by different sources and in different ways, people become acclimated to ideas that may, at first, seem radical,” Jacobs said.

Sullivan stressed the value of sharing data through AIDSVu.

“We hope that the newly available data on AIDSVu will allow health departments, elected officials, medical professionals and community leaders to better understand and visualize the realities of who has access to this important prevention tool so they can develop programs and policies to decrease barriers,” Sullivan said.

Senate Republicans introduce bill to give companies a license to discriminate