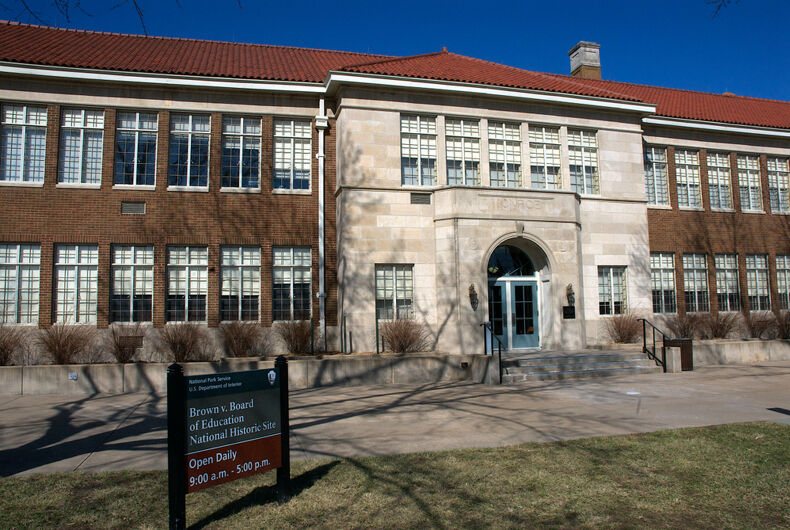 The Monroe School historic site of Brown v Board of Education.Photo: Shutterstock

We mourn the passing of Linda Brown at the age of 75, who died at her home in Topeka, Kansas on March 25 and commemorate her as a shining leader in the cause for civil rights.

There are pivotal events in the life of every country that forever separate before from after. The “before” occurred in the 1896 Supreme Court decision of Plessy v. Ferguson ruling that segregated facilities did not constitute a violation of the United States Constitution.

Not until 1954, in another Supreme Court case, Brown v. Board of Education, was the ruling overturned when the Court decided that the concept of “separate but equal” was inherently unequal.

On June 7, 1892, Homer Plessy, a shoemaker, was jailed for sitting in a “white” car of the East Louisiana Railroad. He was 1/8 black and 7/8 white, and, therefore, was required to sit in the “colored” car according to the so-called “one drop” rule – one drop of “black” blood makes you black.

Plessy sued in the case Homer Adolph Plessy vs. The State of Louisiana in 1892, in which Plessy claimed in state court that the Separate Car Act violated the 13th and 14th Amendments of the U.S. Constitution: 13th Amendment: abolition of slavery, and the 14th Amendment prohibited restrictive state legislation:

No state “shall make or enforce any law which shall abridge the privileges or immunities of the citizens of the United States…[or] deprive any person of life, liberty, or property without due process of law, [or] deny to any person within its jurisdiction the equal protection of the laws.”

Judge John Howard Ferguson in the state court decided that the state could regulate railroad companies that operated only within Louisiana (though he earlier ruled that it was unconstitutional if the train traveled between different states). The Court, therefore, ruled against Plessy.

Plessy appealed to the United States Supreme Court. In Plessy vs. Ferguson, 1896, by a ruling of 7-1, the court upheld the lower court’s decision. Writing for the majority, Justice Henry Brown wrote:

That [the Separate Car Act] does no conflict with the Thirteenth Amendment, which abolished slavery…is too clear for argument….A statute which implies merely a legal distinction between the white and colored races—a distinction which is founded in the color of the two races, and which must always exist so long as white men are distinguished from the other race by color—has no tendency to destroy the legal equality of the two races….The object of the [Fourteenth Amendment] was undoubtedly to enforce the absolute equality of the two races before the law, but in the nature of things it could not have been intended to abolish distinctions based upon color, or to enforce social, as distinguished from political equality, or a commingling of the two races upon terms unsatisfactory to either.”

This case set the precedent that separate facilities for blacks and whites were constitutional if they were allegedly equal (though for all intent and purposes, they certainly were not equal). This “Separate but Equal” doctrine soon extended to other areas of public life including restrooms, restaurants, theaters, hospitals, and public schools.

It also extended Jim Crow laws throughout the South. These laws were passed following the enactment of the 13th Amendment of the United States Constitution to limit rights of black people who were newly-freed.

Linda Brown, a young black child, was forced to ride a bus five miles each way to and from her school, even though there was another school located only five blocks from her home in Topeka, Kansas. The school closer to her home was not full, but because it accepted only white children, she was not permitted to attend.

Linda’s father, Oliver Brown, objected that his daughter could not attend the white school. Aided by the local chapter of the NAACP, Brown and a group of 12 other parents filed a class-action suit in court against the Topeka Board of Education.

On May 17, 1954, the United States Supreme Court, in a unanimous decision in Brown vs. Board of Education, ruled that the separate but equal clause (set down in the case of Plessy vs. Ferguson) was unconstitutional because it violated the children’s rights as covered in the 14th Amendment of the Constitution by separating them solely on the classification of skin color.

Delivering the court opinion, Chief Justice Earl Warren wrote that the “segregated schools are not equal and cannot be made equal, and hence they are deprived of the equal protection of the laws.”

Thurgood Marshall, director-counsel of the NAACP’s Legal Defense Fund, argued the case in front of the Supreme Court. In October 1967, President Lyndon Johnson appointed Marshall to the U.S. Supreme Court.

Marshall and his legal team based much of their defense on the work of two social scientists with doctorates in psychology, Kenneth and Mamie Clark, who conducted studies on the effects of segregation on black children.

The Clarks handed black children four dolls, two with dark-colored shin and two with light-colored skin. They then asked the children questions such as which dolls were “nice” and which were “bad” and “which doll is most like you?”

The results showed the majority of black children preferred the white dolls to the black dolls, with the children saying the black dolls were “bad” and the white dolls looked most like them. The tests provided clear proof that the system of enforced segregation imposed on African American children a sense of inferiority that would last throughout their lives.

A full ten years following the Brown vs. Board of Education decision, only 1% of black children attended desegregated schools in the South. Many southern political leaders considered the decision as an abuse of judicial power. For example, following the court decision, many public school districts in Virginia closed anywhere from one day to five years rather than integrate.

And Governor George Wallace of Alabama declared in his inaugural address on January 14, 1963, that “I draw the line in the dust and toss the gauntlet before the feet of tyranny, and I say segregation now, segregation tomorrow, segregation forever.”

Brown vs. Board of Education set the stage that strengthened the doctrine that “separate but equal” is inherently unequal due to the brave actions of these civil rights pioneers.