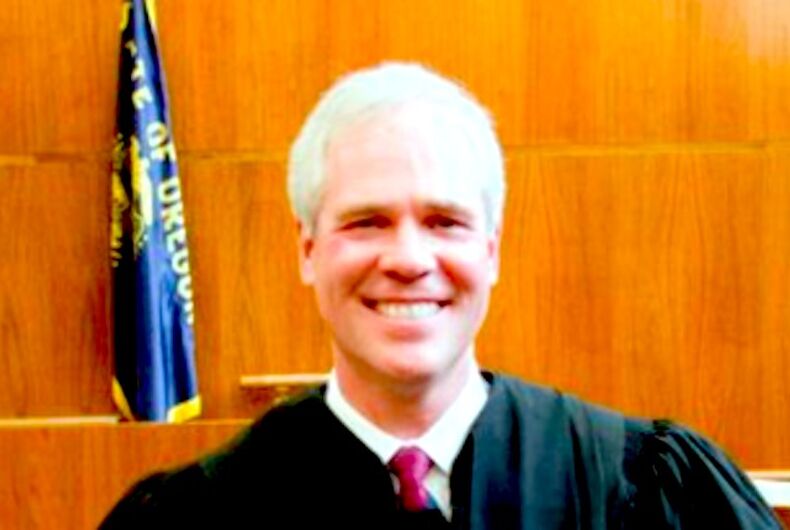 The Oregon Supreme Court has suspended a judge for three years without pay for six misconduct charges, including several about his refusal to marry same-sex couples.

This is the longest suspension for judicial misconduct that the court has ever handed down.

Marion County Circuit Judge Vance Day got the attention of the state’s supreme court in 2015 when multiple complaints were filed about him, including several about his refusal to perform same-sex marriages.

Marriage equality was legalized in Oregon in 2014, and at first Day just refused to marry same-sex couples. He told his staff to send same-sex couples to other judges but did not refuse to hear heterosexual couples.

The next year, he said that he wouldn’t marry anyone at all.

According to Day’s attorney, he had a right to refuse the parts of his job that violated his “deeply held religious beliefs.”

“I don’t believe that by taking the oath as a judge, that I somehow set aside my First Amendment civil liberties and that as a judge I’m a lesser species of protection,” Day told the Statesman-Journal in 2015.

He also said that he was treated like a “punching bag” because he’s a Republican.

Day faced eight charges of judicial misconduct, including lying to the commission that investigated him, allowing a felon to handle a firearm in court, intimidating a referee at his son’s soccer game by pulling out his business card, and hanging a picture of Adolf Hitler at the courthouse.

Day admitted to hanging the portrait of Hitler as part of a “Heroes for Heritage Hall” gallery, but said that it was a “trophy” taken by U.S. forces in World War II.

The Oregon Supreme Court found him guilty of six of the eight charges. They dismissed the charge about the Hitler portrait, and they said that they did not have jurisdiction over the soccer game incident.

“He indisputably communicated to his staff his intention to treat same-sex couples differently from opposite-sex couples,” the opinion said.

“Those aspects of [his] misconduct suggested that he was not trustworthy; negatively affected his ability to serve in a court system that foundationally depends on truthful statements; and undermined the integrity of the judiciary and [his] character as a judge.”

“We are evaluating an appeal to the United States Supreme Court,” his attorney said.

Alex Jones: Why are lesbians like Hillary Clinton ‘so uptight’?

A company wants to end the taboo around periods. This trans man will help them.