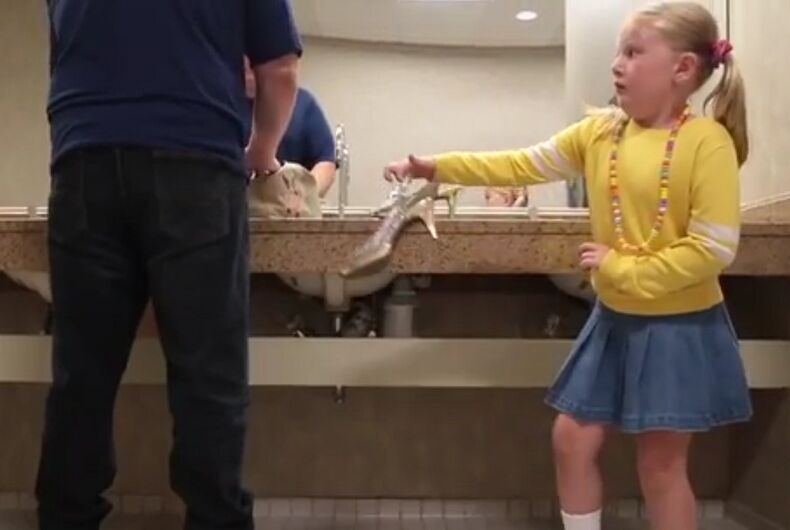 A grocery store chain has asked an anti-LGBT organization to stop using their store in ads.

Earlier this week, the organization “Keep MA Safe,” which is in favor of a Massachusetts ballot initiative that would remove gender identity from the state’s anti-discrimination law, released an ad about a little girl encountering a “transgender woman” in a public restroom.

In Keep MA Safe’s ad, a little blond girl and a man are walking in a grocery store, and she goes to the bathroom. In the next stall, a person dressed in stereotypically male clothes and a butch haircut (who is supposed to represent a transgender woman) puts down a bag with a pink, sequined heel and uses the toilet.

The girl looks under the stall divider and is shocked. The trans woman goes to the sink to wash her hands and apply lip gloss, and the little girl hands her the sequined heel, which fell out of the bag.

Astute viewers noticed that the girl and the man are walking down an aisle at Wegmans in the beginning of the ad, a supermarket chain in the mid-Atlantic and New England.

Jo Natale, a spokesperson for Wegmans Food Markets, said that the store didn’t know anything about the ad and they want it removed.

“It appears that the footage in the aisle and in the corridor leading to restrooms was shot in one of our stores, but it was done without our knowledge or permission,” she told INTO. “For this reason, we have sent a letter asking that they remove the video from their web site and anywhere else where it may be used.”

Natale added that the bathroom scene itself wasn’t shot in one of their stores, just the first part of the ad.

Keep MA Safe hasn’t responded to the letter and hasn’t commented on the ad. But the organization released a new version of the ad on YouTube yesterday, without the first part.

Even though the ad is supposed to show how terrible it is for transgender people to use the bathroom, the trans woman doesn’t do anything to the little girl.

If anything, it’s the little girl who needs to learn not to look under stall dividers, but no one is pushing a referendum to keep kids out of public bathrooms.

This gay couple died together when the Miami bridge collapsed