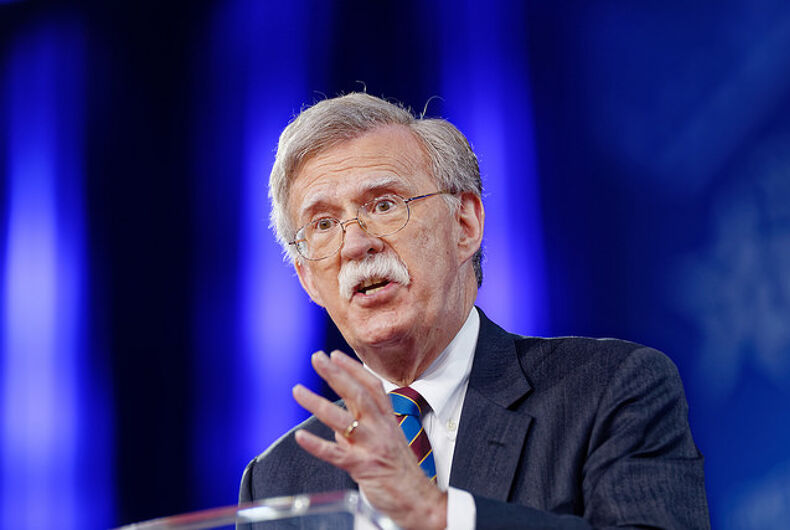 Bolton is a warmonger who embraces confrontation. He’s called for first-strike military action against North Korea and Iran. When he was Ambassador to the U.N. under George W. Bush, Bolton dismissed diplomacy, saying that if the top ten floors of the U.N. headquarters were to disappear, “it wouldn’t make a bit of difference.”

Bolton is famously combative in his management as well. A former staff member called him a “serial abuser,” and a former government contractor said Bolton bullied her about her weight and threw a tape dispenser at her.

All in all, it’s no surprise that Richard Painter, the chief ethics officer under Bush, said that his fellow alum was “by far the most dangerous man we had in the entire eight years.” Which is saying a lot in an administration that featured Dick Cheney and Donald Rumsfeld.

Of course, for Donald Trump, these characteristics are a feature, not a bug. Bolton speaks the same language of belligerence and domination as the president. The only reason that Bolton wasn’t working for Trump sooner is that Trump didn’t like Bolton’s mustache.

As the rest of the world contemplates whether Bolton’s appointment brings us to the brink of a nuclear exchange, the Log Cabin Republicans would like you to know that Bolton is pro-gay.

It is true that on this single topic, Bolton does not fit in with his fellow right wingers. In 2013, when he was considering a presidential run (which he did not pursue), he came out in favor of marriage equality.

In a White House increasingly made up of Cabinet members who are openly anti-gay, Bolton could serve as an important counterbalance. But the problem is that potential benefit comes with tremendous downsides. Bolton is widely seen as encouraging Trump’s inclinations, especially against North Korea.

A first-strike attack on North Korea, which Bolton advocates, may not lead to that country responding with a nuclear attack. But it could still unleash a torrent of destruction on South Korea, potentially killing millions.

Even if that catastrophe never comes to pass, it’s worth asking: does having an ally on our issues in the White House outweigh all the other risks?

A hate group used a store in an anti-LGBT ad. The store got them to stop.