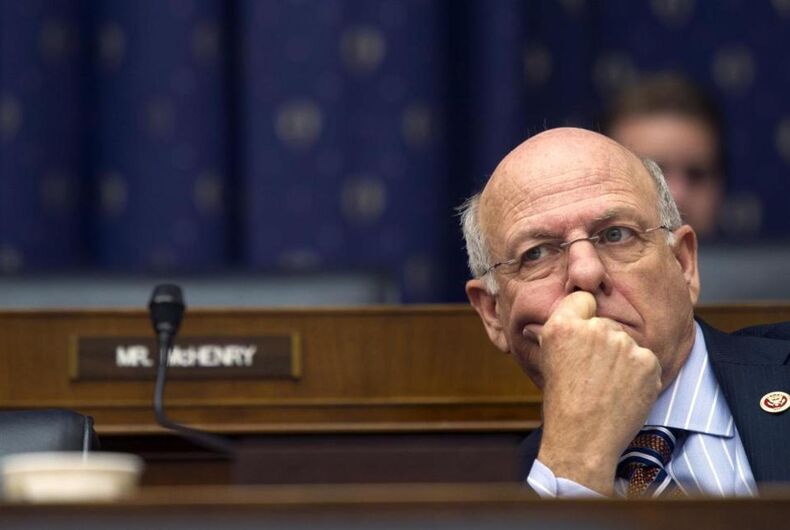 FILE - In this Feb. 11, 2014, file photo, House Financial Services Committee member Rep. Steve Pearce, R-N.M., listens on Capitol Hill in Washington. Pearce is running for governor of New Mexico in 2018 while giving up his hold on a congressional district along the U.S.-Mexico border. Pearce announced Monday, July 10, 2017, he will seek the GOP nomination in an attempt to succeed second-term GOP Gov. Susana Martinez. Photo: (AP Photo/Cliff Owen, File)

Video has surfaced of a Republican congressional representative decrying “polymorphous” marriage for people with HIV/AIDS.

Rep. Steve Pearce is running for governor of New Mexico this year. American Bridge 21st Century PAC found a video that was posted on YouTube in October 2008 and sent it to the Huffington Post.

Pearce called marriage equality “the redefining of a social institution.”

“The redifinition has serious downside results,” he said.

“The next step, then, is polymorphism, where one marries many,” he said, misusing a biology term for the phenomenon of multiple forms of a single gene.

“Where this is headed is towards the access of benefits. And so you can imagine that one person would say, ‘All these people in California don’t have access to AIDS treatment. I’m going to marry everybody in California with AIDS.’ So they can have access to the benefit program or health insurance that a single person has.”

Needless to say, marriage equality has been legal in California since 2013 and this has not happened. And even if it did, Pearce does not explain why people having access to life-saving medication is a bad thing.

A spokesperson for the Pearce campaign neither confirmed nor denied the veracity of the recording, but she said that Pearce is still opposed to marriage equality in 2018.

“Congressman Pearce believes the government should not be involved in redefining marriage,” the spokesperson said. “He personally believes marriage is between a man and a woman.”

“These offensive comments only further confirm that Steve Pearce is too extreme for New Mexico,” the Democratic Governors Association said in a statement.

This is not the first time that Pearce has come under fire for extreme statements. In his 2014 memoir Just Fly the Plane, Stupid!, he wrote, “The wife is to voluntarily submit, just as the husband is to lovingly lead and sacrifice.”

He cited the Bible and denounced Christians who ignore that part.

He wrote that the obedience has nothing to do with inferiority. “The wife’s submission is not a matter of superior versus inferior; rather, it is self-imposed as a matter of obedience to the Lord and of love for her husband.”

Pearce has been in the U.S. Congress since 2003 and is running unopposed in the Republican primary. Rep. Michelle Lujan Grisham, a member of the House Equality Caucus, is the current frontrunner in the Democratic primary.

Scientists discover DNA that could be responsible for gender identity