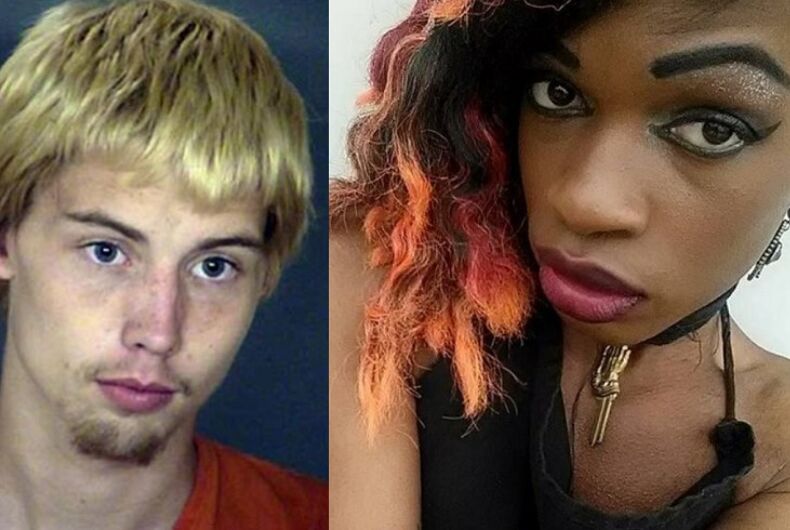 Over 70 activists protested in San Antonio yesterday after a judge last week ruled that the man who admitted to killing a transgender woman would not face trial.

The ruling was denounced by transgender activists in Texas. “Transgender women of color and black trans women are being murdered at an alarming pace,” an activist told the San Antonio Current. “When this happens in our city we expect to see justice served. We demand justice for Kenne! We refuse to go away and will show up to make our voices heard.”

Around 70 protestors turned out, holding signs that said “United against hate” with the HRC logo and Texas flags with rainbow stripes.

March held at Crockett Park for #KenneMcFadden, a transgender woman who drowned in April 2017. Her body was found floating in the San Antonio River. The man believed to be responsible will not go to trial after a recent ruling by a local judge. @News4SA @KABBFOX29 pic.twitter.com/aN7TNCb7Ld

“We’re hoping that we’ll see an openness and willingness from our elected officials, from our [district attorney’s] offices, from judges to learn about the transgender community, the violence that faces us far too often,” said Emmett Schelling of the Transgender Education Network of Texas.

Trans activists in San Antonio gathered at the courthouse today to decry the lack of justice for Kenne McFadden, a trans woman who was found in the River Walk last year. The man indicted for her death will not stand trial. pic.twitter.com/xChW0ZyOos

“Kenne could have easily been me or any other black trans woman,” Monica Roberts, who blogs at TransGriot, told News 4.

Kenne McFadden’s body was found in the San Antonio River last April two days after Mark Daniel Lewis admitted to police that he pushed her in. Her family said that she didn’t know how to swim.

Lewis said that they were kissing when McFadden touched his butt and asked to go home with him. His defense was that he didn’t like being touched and that he only meant to push her away.

“The consequences of that push were unforeseen,” his attorney said.

A grand jury indicted Lewis on manslaughter, and prosecutors presented evidence at a hearing involving a separate matter in an attempt to revoke his probation.

Republican Judge Joey Contreras ruled at the probation hearing that there wasn’t enough evidence to show criminal wrongdoing in the case. The double jeopardy rule will keep Lewis from facing a full criminal trial for McFadden’s death.

Happening now: Dozens of people are rallying at Crockett Park in San Antonio for Kenne McFadden, a black trans woman who was found in the River Walk last year. The man accused in her death will not stand trial. pic.twitter.com/X3p3I9LIzb

The judge is an elected official, and protestors called on voters to get him out of office.

“In November, when Joey Contreras is up for election, we can vote him out,” said Frankie Gonzales-Wolfe, who has previously worked on Democratic election campaigns. “If he survives his primary.”

Kenne’s mother Joanne McFadden was at the protest, after being so shocked by the judge’s ruling that she had to be taken to the hospital.

“They would have seen it differently if it had been one of their children,” she said, referring to Contreras and LaHood.

“Parents, love your children,” she said. “Its time for parents to accept their children for who they are.”

Richard Simmons sued a tabloid for calling him trans. Now he has to pay their legal fees.