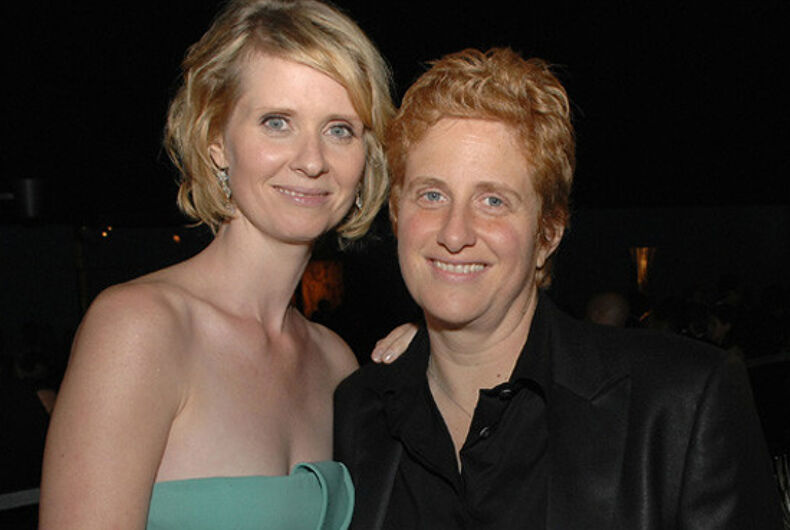 Actress Cynthia Nixon, best known for her role on Sex and the City, announced this week that she would be challenging Andrew Cuomo in the Democratic primary for governor of New York.

Quinn got a lot of attention for what appeared to be an attack on Nixon’s sexual identity, and she has since said that was not her intent.

Except… Nixon has been quite insistent for years that she’s not a lesbian.

If anything, the most obvious criticism of Quinn’s comments is bisexual erasure – how bi people are told that their sexualities aren’t real or permanent, that people can only be gay or straight, that they’re lying or in denial – something that Nixon has repeatedly spoken against.

Nixon began dating her now-wife Christine Marinoni in 2004 after ending a 15-year relationship with a man. Immediately, her story was being told as that of a lesbian finally coming to terms with her sexuality, a narrative that Nixon rejected.

“In terms of sexual orientation I don’t really feel I’ve changed,” she said in 2008. “I don’t feel there was a hidden part of my sexuality that I wasn’t aware of. I’d been with men all my life, and I’d never fallen in love with a woman. But when I did, it didn’t seem so strange. I’m just a woman in love with another woman.”

In 2012, she got criticized for saying that her relationship with a woman was a “choice.” She responded by in an interview with The Advocate by saying that she’s bisexual: “While I don’t often use the word, the technically precise term for my orientation is bisexual. I believe bisexuality is not a choice, it is a fact. What I have ‘chosen’ is to be in a gay relationship.”

Sessums asked her if she identified as bi, and she said, “I just don’t like to pull out that word. But I do completely feel that when I was in relationships with men, I was in love and in lust with those men. And then I met Christine and I fell in love and lust with her. I am completely the same person and I was not walking around in some kind of fog. I just responded to the people in front of me the way I truly felt.”

But in 2017, she was again asked about her “choice” statement and she told The Huffington Post that she doesn’t really identify as bi. “I didn’t really identify as bisexual, but people were so insistent that I pick a ― you know, it caused a huge controversy and everyone wanted to graft on to me this narrative ― I felt that I had just simply been mistaken about myself for all these years and finally the veil was lifted and I was a lesbian. And that was not true.”

And now she casually said that she’s a lesbian.

Does she think that she’ll be “dumped on” in the election if she’s seen as bi instead of a lesbian? Does she identify as a lesbian now? Or is she just so tired of bisexual erasure that she couldn’t bring herself to correct Quinn?

No matter what the answer is, Quinn should have known better. Nixon has said that she’s bi for a long time now. Everyone else – especially other LGBTQ people – should respect that.

If Tony Perkins wants to know who’s discouraging evangelicals, he should look in a mirror