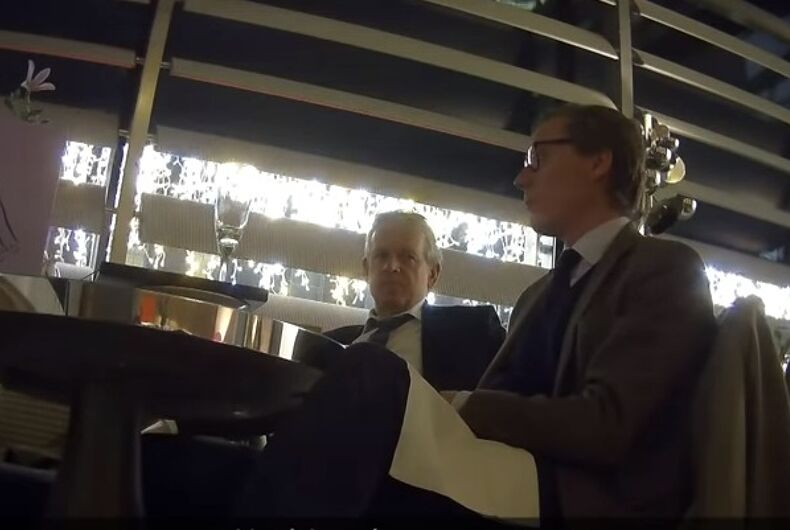 Channel 4 has released damning footage, filmed secretly, of one of Cambridge Analytica’s top ranking bosses suggesting spreading gay rumors could be a way to take down political opponents.

The UK based data mining and analysis company has used its abilities to help influence the outcome of elections around the world, but has come into the harshest spotlight over their efforts to get Donald Trump elected president.

As part of their reporting, Channel 4, posing as potential clients, spoke with Managing Director Mark Turnbull, Chief Data Officer Alex Taylor, and CEO Alexander Nix, under the auspices of gaining information about how the company works.

Nix volunteered a number of examples of “what can be done and what has been done,” including using sex workers and bribes. A transcript of a conversation from January 2018 at the Berkeley Hotel, where Nix, according to the transcript, responds to the undercover reporter suggesting spreading a rumor that his opponent is gay, as it could lead to his resignation.

Turnbull explained in another conversation that “…our job is to…drop the bucket further down the well than anybody else, to understand what are those really deep-seated, underlying fears, concerns. There’s no good fighting an election campaign on the facts, because actually it’s all about emotion,” Turnbull said.

He added that he has connections to former spies who help data analysis firms such as his to gather information.

“I know people who used to work for M15, M16, who now work for these private organizations,” he asserted.

He said they “operate very discretely…to find all the skeletons in (a candidate’s) closet quietly, discretely, and give you a report.”

Nix told Channel 4 he “looked forward to building a long-term and secretive relationship” with the faux candidate. Nix has since been suspended due to the investigation into his company’s tactics.

The company has released a statement denying “any allegation that Cambridge Analytica or any of its affiliates use entrapment, bribes, or so-called ‘honey-traps’ for any purpose whatsoever.”

“We routinely undertake conversations with prospective clients to try to tease out any unethical or illegal intentions,” it claimed. “Cambridge Analytica does not use untrue material for any purpose.”

So… is Cynthia Nixon a lesbian now?