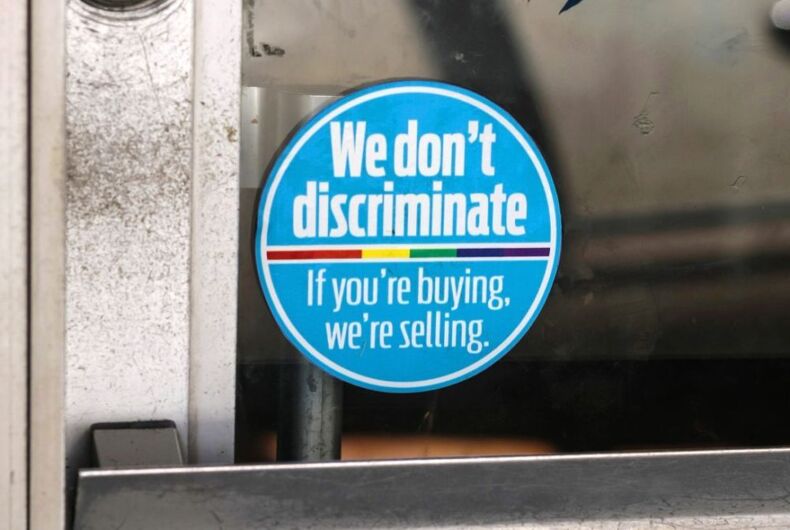 The Kentucky House of Representatives is swerving away from a freedom-to-hate bill — thanks in part to businesses pushing back.

House Bill 372 would have given churches and religious organizations the right to ignore the municipal LGBTQ protections now in nine Kentucky cities.

The original bill had 46 sponsors among 100 state representatives. But State Rep. Jason Nemes, a Louisville Republican, has led a rewrite of the bill, the Lexington Herald-Leader reports. The proposed legislation now only clarifies that churches and ministers can cite religious objections and not provide weddings for same-sex couples. Federal law already allows church leaders to decline to marry anyone; the issue was already settled in a 2015 U.S. Supreme Court decision.

Among the Kentucky cities with civil-rights protections for LGBTQ people are Louisville, with a quarter of the state’s population, Lexington, with the University of Kentucky, and Frankfort, the state capital. In January, Paducah became the first city in western Kentucky to do so, the Louisville Courier Journal reports.

However, Kentucky may be seeing what other states have learned — that businesses can pay dearly for such religious-freedom legislation that allows LGBTQ discrimination.

“They had concerns, frankly, about how it would appear to those outside Kentucky if we seemed to be discriminating against any one particular group,” Adkisson said, according to the Lexington Herald-Leader.

Indiana, to the north, led by then Gov. Mike Pence, and North Carolina, to the southeast, have both felt the financial pinch after anti-LGBTQ campaigns in their statehouses.

Related: Not all the same: Christian Right’s Hobby Lobbyization of RFRAs hits the fan

And Kentucky is already on the no-travel list for state-funded travel from California after it passed 2017 legislation that allowed student groups to discriminate against LGBTQ people. When California attorney general Xavier Becerra, announced the ban in January 2017, Kentucky Gov. Matt Bevin’s press secretary, Woody Maglinger, had denounced it as “far-left political ideology,” the Herald-Leader reported.

In contrast, Louisville’s mayor, Greg Fischer, a public supporter of LGBTQ rights, had pleaded that his city — home of the Kentucky Derby and considerable convention business — be exempted. It wasn’t.

As of June 2017, the California ban had already cost the city $2 million in future revenue, the Courier Journal reported.

Meanwhile, Kentucky is embroiled in other controversy. The state’s Republican governor, Matt Bevin, who had signed last year’s anti-LGBTQ legislation, has made a controversial push to slash pensions of state employees. Those employees include public-school teachers, who are now protesting in the capital.

With Bevin’s battle raging, statehouse Republicans may have been hoping this anti-LGBTQ legislation would give them momentum going into the fall elections, Louisville Democratic Representative Joni Jenkins said to the Herald-Leader.

“Honestly, I haven’t heard any outrage from any of the churches in my district about having to participate in anyone’s weddings,” Jenkins said, “so I don’t know what problem this is supposed to be solving.”

Alex Jones: Why are lesbians like Hillary Clinton ‘so uptight’?