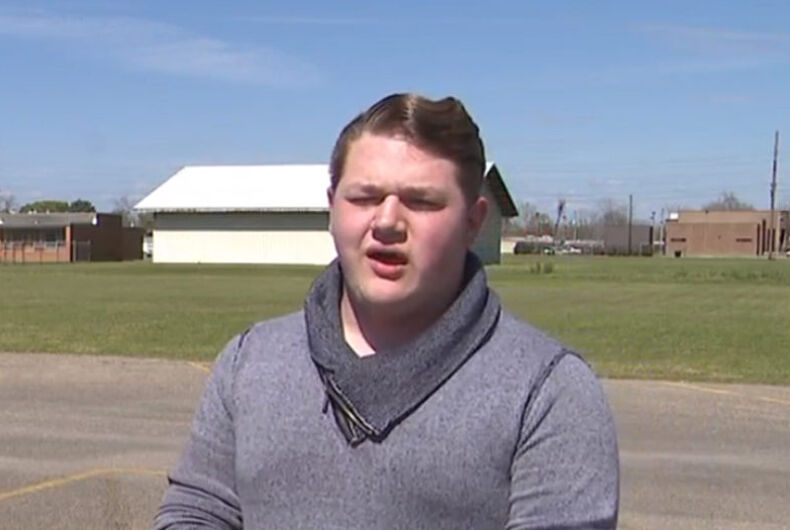 A 19-year-old, openly gay Texas councilman whose nude photos and conversations from a dating app were anonymously mailed to city administrations and media outlets at the end of last month says he suspects homophobia is behind the release of the material.

“I felt like I was being harassed, discriminated against, ’cause I’m a young gay man on (Groves) City Council,” Cross Coburn, who  told the local CBS outlet.

“Is this in any way proper behavior of a councilman to represent himself online or a “dating” app? I felt the City Council should be made aware,” a letter sent with the materials read.

“That is my personal life, and no one should know about it,” Coburn said. “And I’m sorry if anyone took it the wrong way, but it really was nothing more complex than, it’s just my personal life.”

“I don’t see anything wrong with what I did, and I don’t think I should be judged for what happened,” he added, saying he had the “freedom of speech and expression” to send nude photos.

Mayor Brad Bailey has criticized Cosburn’s behavior, but confirmed it is not actionable. He said the only thing that could be done would be to hold a special election, but that would have to take place after Cosburn has served for at least six months. Cosburn was elected Ward 1 councilman in November after running unopposed, reports the Laredo Morning Times.

“At the end of the day, with the city attorney, we felt like there was nothing truly that was done illegally,” Bailey said. “Now disturbing, maybe. There are a ton of adjectives you can use to describe what was in the pictures.”

He added that he felt elected officials should be held to a “higher standard.”

“I am 19, still very young,” Coburn told the Port Arthur News. “The reason I want this position is to learn. This is my first political post in my own hometown, and it’s a great way of learning.”

Bailey said the council hasn’t met “since these allegations have been brought forth.”

“The uncomfortableness and the awkwardness of it all, that hasn’t come into play yet,” he added. “We have a meeting on Monday.”

A Republican is demanding a gay man be named an ambassador. A Democrat is opposing it.

Businesses are saying no to ‘religious freedom’ laws & lawmakers are listening