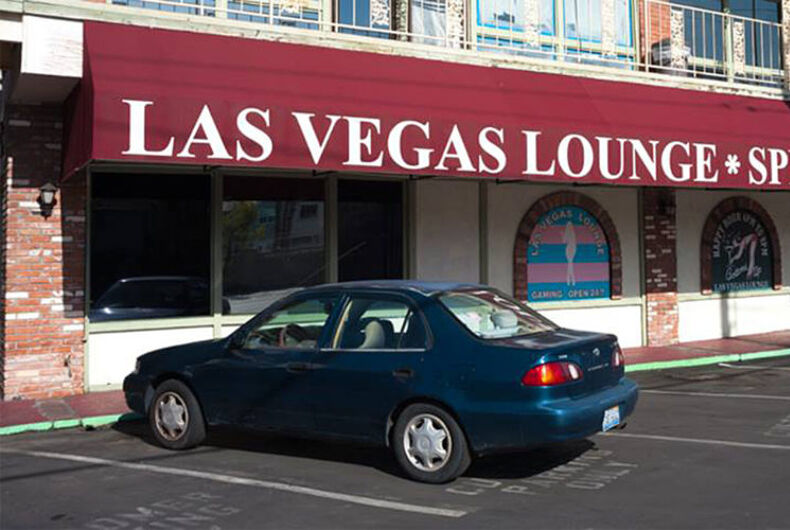 Someone shot into the Las Vegas Lounge, injuring at least two people.Photo: Facebook

Someone shot into a Las Vegas transgender club on Friday, injuring at least two people, before fleeing the scene.

Police are investigating the shooting, which took place at the Las Vegas Lounge, and resulted in two individuals being taken to the hospital with non-life threatening injuries. One, black transgender woman Callie Lou-Bee Haywood, was shot in the leg. Another person was shot in the stomach, according to the local Fox affiliate.

The club’s windows are dark, and covered with advertisements and a transgender pride flag, meaning whoever shot into the club was aiming indiscriminately. Haywood said the shooting was likely done as a message that “trans people are not welcome here.”

The only other intial report of the incident came from the Las Vegas Review-Journal. Neither mention the incident took place at a transgender club, the city’s only one, and one of only three in the entire country, Into notes.

Outside of Into, and a write-up from The Daily Dot, there has also been little reporting of the incident outside of the mainstream media. That is particularly notable considering the country is locked in a heated debate about gun control, following the school shooting in Florida.

The incident in Las Vegas also occurs in the context of a world post the Pulse nightclub shooting in Orlando, where many argued that the LGBTQ community might be the group that was well organized and funded enough to successfully take on the issue of gun control in this country. So far, nothing has materialized on that front, and hope has shifted to the organizing being undertaken by the survivors of the Florida school shooting.

Haywood posted on Facebook asking why there hadn’t been more media coverage of the issue, and arguing that the LGBT community failed to “[have] our backs.”

One activist, an artist named Raven Shepard, has started a hashtag, #WeDemandTransCoverage, to try to bring more attention to anti-trans violence.

https://t.co/xsbxmnDOs4
It’s disgusting that this happened, but more disgusting that no media aside from a focused website bothered to cover it. Even other LGB media didn’t cover this story of VIOLENCE AGAINST TRANS PEOPLE.

Here’s a hashtag for you #WeDemandTransCoverage

So far, in the United States during the first two months of this year alone, at least four transgender women have been murdered.

The club’s general manager, Jennifer Hallie, also posted about the incident on Facebook. She said police are treating the case as a random incident of violence.

“We have had many trying times throughout the years, and though we may bend we will not be broken by this. We are still open for business, and are still proud to serve our community,” Hallie added.

Hallie has launched a GoFundMe to help with Haywood’s medical bills, and will also hold a benefit event at the club on Friday night.