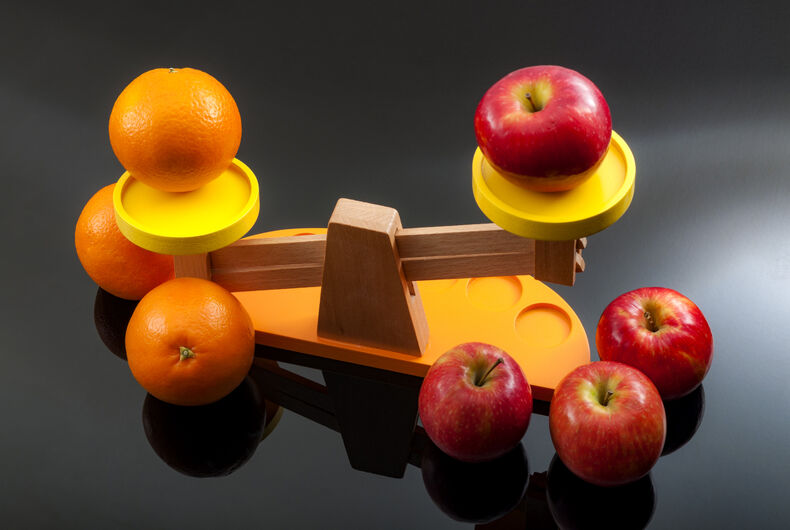 With the rise of Trump, every deplorable has decided they too have a chance at winning public office, thus gaining a bigger platform to spew their hatred and bigotry. Meanwhile, more moderate Republicans have practically been left behind as the party lurches ever further right.

Two Republican politicians from Illinois are the perfect illustration of the divide inside the party.

Governor Bruce Rauner is a pro-choice ally of the LGBT community who has been attacked by members of his own party for being too liberal. Arthur Jones, a white supremacist and Holocaust denier, is poised to become the party’s official congressional candidate for a district that encompasses the Chicago suburbs.

“Well first of all, I’m running for Congress not the chancellor of Germany. All right. To me the Holocaust is what I said it is: It’s an international extortion racket,” Jones told the Chicago Sun-Times.

Jones isn’t shy about his far right stances on equality either. His campaign website even includes a section called “The ‘Holocaust Racket’,” describing the genocide as “the biggest blackest lie in history.” Jones, 70, is the presumptive nominee since no other Republicans have stepped forward in the heavily Democratic district.

Meanwhile, Rauner was a featured speaker at the Equality Illinois gala over the weekend and his wife also spoke to the group’s supporters.

“Justice, fairness, equal opportunity, equal treatment under the law—these are the principles that make America the beacon of hope for the entire world,” Rauner told the audience according to the Windy City Times. Thank you for your dedication. Thank you for your leadership. Thank you for showing us how to treat each other with dignity and respect. Diana and I believe that fairness is in our DNA in Illinois.”

Rauner’s pro-equality stances have made him a prime target for Trump and Jones’ wing of the party.

Describing the Governor as “a Republican that refuses to reach out to the Illinois’ GOP social conservative base,” the conservative website Illinois Review claimed he would “celebrate abortion, gay rights and transsexualism” at the event instead of celebrating civil rights.

Rauner’s GOP Primary opponent state representative Jeanne Ives jumped in on the attack on Twitter, asking her followers “Why does he represent Republicans and What [sic] are you going to do about it?”

Earlier this week, Ives released a political ad called “Thank you, Bruce Rauner” that is so blatantly offensive even the state party condemned it and asked her to take it down. She refused.

The spot features a man dressed as a woman thanking the governor for protecting transgender people in a deep voice, a young woman wearing a pink hat thanking him for making taxpayers “pay for my abortions,” and a hoodie wearing man with his face partially hidden by a bandana thanking him for making the state “a sanctuary state for illegal immigrant criminals.”

“There is no place in the Illinois Republican Party for rhetoric that attacks our fellow Illinoisans based on their race, gender or humanity,” Illinois Republican Party Chairman Tim Schneider told the Chicago Tribune. “Rep. Ives’ campaign ad does not reflect who we are as the Party of Lincoln and as proud residents of our great and diverse state,” said Schneider, an ally of Republican Gov. Bruce Rauner, who Ives is challenging in the March 20 primary.

Except there is room in the Republican party now for conspiracy theorists, white supremacists, and neo-Nazis – as proven by Jones’ candidacy and the fact that Ives has a seat in the state legislature. Now the only question left is which side will win in the end.

Trump is sending an HIV+ gay man to his death