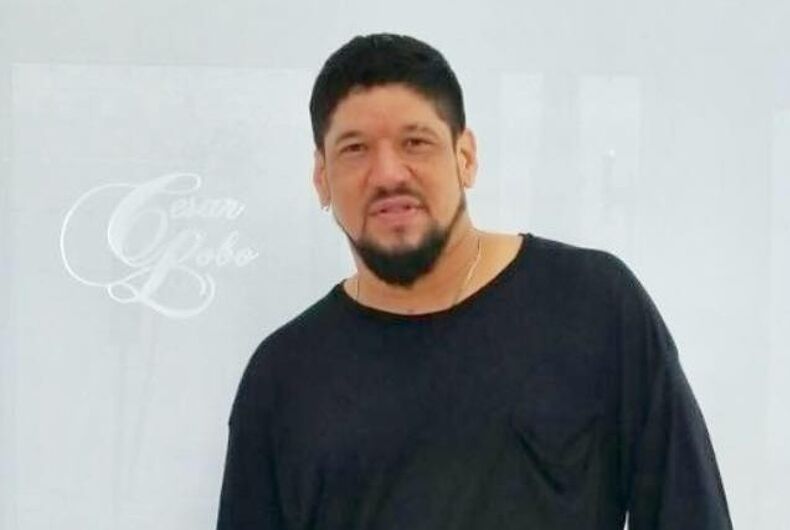 Ricardo Querales has turned his life around, but it might not matter, as the Trump administration looks to deport him anyway.Photo: Facebook/Querales

Ricardo Querales, an HIV-positive gay man, is afraid he doesn’t have much time left, as the Trump administration plans to deport him back to a country where he is unlikely to obtain life-saving medications.

“You are sending me to my death!” Querales, 43, told immigration officials when they informed him that he would have to return to Venezuela. “This is anti human rights. In Venezuela, there is no medicine and every day someone with AIDS disappears.”

The country is undergoing a catastrophic shortage of food and medicine, while the government denies there is any crisis whatsoever and goes after protesters and dissidents with alarming severity.

Health organizations are reporting an increase in HIV patients dying due to a lack of antiretroviral drugs in Venezuela.

“There is a very serious crisis in Venezuela, and if he has HIV and there are no drugs there, he should ask that they not take him out of the country for humanitarian reasons,” advised immigration lawyer Marcial De Sautu.

Meanwhile, while the government offers some few protections for the LGBTQ community, progress has been slow and inconsistent, with refugees reporting that they had no choice but to flee for their own safety.

Querales arrived in the United States in 2003, escaping political persecution and insecurity, reports the Miami Herald. His request for asylum was granted a year later. He was diagnosed as HIV-positive in 2006. Sadly, he was part of a growing trend. Between the year he was diagnosed and 2015, HIV diagnoses in Miami-Dade County among Latino men increased by a whopping 70 percent.

According to the CDC, the problem is hardly relegated to Florida. In 2016, the South accounted for 53 percent of the new AIDS diagnoses in the United States, followed distantly by the West at the Northeast, both coming in at 17 percent, and then the Midwest at 13 percent.

Querales sunk into a depression upon diagnosis, coupled with the loneliness he was feeling being in a new country, and began self-medicating with drug use.

He first got into trouble with law enforcement after a friend borrowed his car and then died of an overdose. When police arrived at Querales’s house, they discovered methamphetamine and drug paraphernalia. He was convicted in 2009 and served 30 days in jail for the offense.

He was then arrested a second time during a raid at a house he was visiting, and while he was not charged with any crime, he was handed over to immigration officials. He spent six months in detention, and it was at that point that his asylum status was revoked.

An immigration judge then signed his deportation order in 2011, but it was stayed as a result of the crisis in his country of origin.

He will stay and fight

“I am a reformed citizen, a decent worker who made mistakes in the past and I am no longer on drugs,” Querales said. He reports that he has been clean for five years.

“They told me they would not deport me because there are no medicines for my treatment in Venezuela,” he added.

His next appointment with Immigration and Customs Enforcement (ICE) is scheduled for February 22.

“My plan is to stay here, fight to the end,” he pledged.

A Spanish language report follows that includes an interview with Querales.

Compare & contrast: Take a look at these two Republican politicians from Illinois

When a teacher assaults a teen who won’t stand for the Pledge of Allegiance, it’s not ‘patriotism’