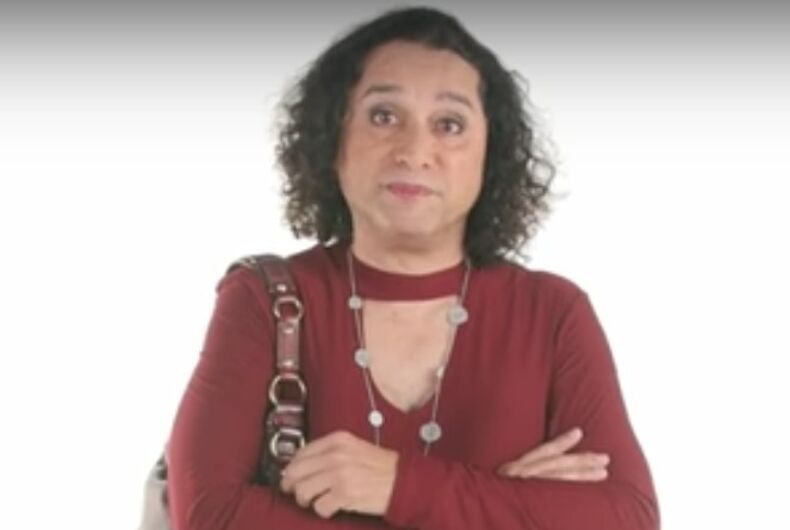 Illinois state representative Jeanne Ives is running in the Republican gubernatorial primary, and her latest ad is absurdly hateful.

Ives is challenging the current governor, Bruce Rauner, and she’s trying to portray him as insufficiently conservative.

The message is clear: Rauner helped people who good conservatives are supposed to hate.

The ad refers to pieces of legislation that Rauner signed, except Ives misrepresents them.

For example, the actor playing the trans woman said, “Thank you for signing legislation that lets me use the girls’ bathroom,” as “HB 1785” was written on the screen. But HB 1785 was about birth certificates, not bathroom access.

The blond, blue-eyed actor with a bandana and an American accent (did he immigrate from Wisconsin?) thanks Rauner for “making Illinois a sanctuary state for illegal immigrant criminals.” The ad is referring to SB 31, which made it harder for Illinois police to arrest undocumented immigrants who have not broken the law and allowed arrests of immigrants with warrants against them.

In other words, the law only increased protections for non-criminals.

The portrayal of the teacher is also terrible. She is, of course, played by an African American woman. While rightwing media has attacked teachers generally for years, they really don’t like “urban” (read: black) teachers.

The actress thanks Rauner “for making the rest of Illinois bail out Chicago Public Schools,” referring to SB 1947, a bill that created scholarships for low-income students and increased funding for schools, including Chicago Public Schools. Which you would think would be popular since everyone agrees that education is important and that we’d do anything for the children, but for some reason kids in Chicago aren’t as important as kids in more… Republican areas of Illinois.

Rauner line-item vetoed the parts of the bill that gave money to Chicago Public Schools but the state legislature ended up passing another bill to get it through.

The teacher also thanks Rauner for “giving Rahm everything he wanted,” which is downright bizarre since the Chicago Teachers Union has protested Chicago Mayor Rahm Emanuel for years.

State Republicans have denounced the ad. State GOP chair Tim Schneider said that it “does not reflect who we are as the Party of Lincoln and as proud residents of our great and diverse state.”

But if Donald Trump’s candidacy is any indication, Republicans are only willing to call out other Republicans’ hatred during the primaries. If she wins, they’ll fall in line.

Ives has a history of hateful comments. In 2013, she said that “disordered” gays were “trying to weasel their way into acceptability.”

Anti-vaccine televangelist: ‘Inoculate yourself with the word of God’