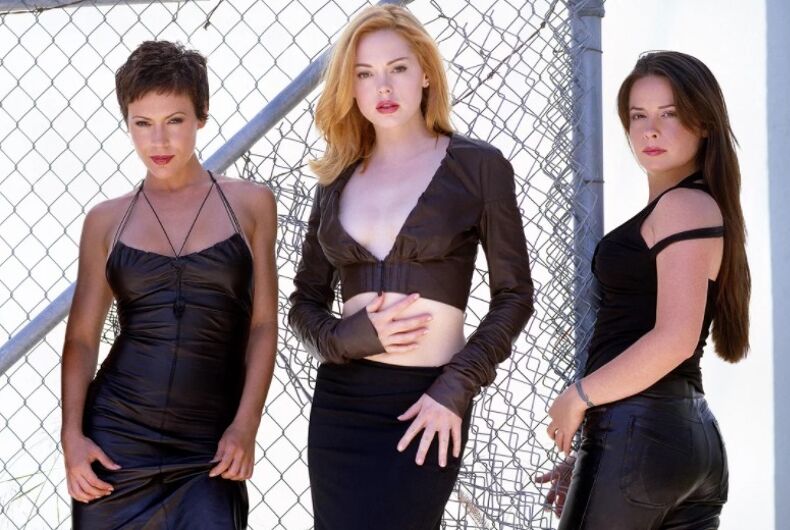 Charmed is returning to the airwaves with a reboot featuring three new witches, and one of them will be a lesbian.

TVLine broke the story, getting their hands on the casting breakdowns for The CW show, where sisters Macy, Mel, and Madison will discover they’re witches. The network is calling it a “fierce, funny, feminist reboot” set in modern times.

The character Mel Pruitt is described as “a strong-willed feminist” in her mid-twenties who “feels deeply and is a bit controlling,” and is a lesbian.

“In the wake of a tragic accident, the grieving Mel becomes angry, defiantly unkempt, even violent, pushing away those who might help her, including her girlfriend, Detective Soo Jin,” it continues. “Mel’s power is time-freezing.”

Madison Pruitt is Mel’s young sister, and is described as a cheerleader pledging a sorority, who is “the opposite of her feminist sister with a desire to fit in.” Her power is the ability to hear people’s thoughts.

Macy has the power of telekinesis, and is described as “a witty, intense science nerd” in her late twenties who is “moving with her boyfriend Galvin to Hilltowne, Michigan, to work in the university lab.”

The original series aired from 1998 to 2006, and starred Alyssa Milano, Shannen Doherty, and Holly Marie Combs. Rose McGowan was added to the cast after Doherty left the show.

Related: Rose McGowan has confrontation at book event with transgender activist who calls her out

Combs is not happy that the show is being remade, registering upset that she and the original crew were not involved.

She criticized the show back in late January, arguing that the network was “capitalizing on our hard work,” and that fans won’t be fooled by a “title/stamp.”

Here’s the thing. Until you ask us to rewrite it like Brad Kern did weekly don’t even think of capitalizing on our hard work. Charmed belongs to the 4 of us, our vast amount of writers, crews and predominantly the fans. FYI you will not fool them by owning a title/stamp. So bye.

She has stepped up her critique since the TVLine article was published.

You had one job @TheCW 🧟‍♀️

It’s official. They really have never watched it.

Combs has taken issue with some media sources for their reporting of her criticisms, arguing that they made it look like she was against the show for including a lesbian character. She clarified that that was not her objection to the reboot.

Hey @usweekly only you got that out of what I said. You should see someone about that. Like my lawyer.

We know you support the LGBT community. A homophobic person would not have done what you did on Picket Fences, nor be so visible to support the community to be noted by glaad:https://t.co/s0BfgJ9tWb
and outspoken on twitterhttps://t.co/XWFY760JB7 https://t.co/GaDRCszIJe (2/2)

This guy did more research in 3 minutes than @people @usweekly and @PerezHilton combined. Please don’t make me use the ______ news hashtag. Please. Trump cannot have this one. https://t.co/Jqe9PUM9z3

I think I made it abundantly clear that I have a few issues with the reboot. The CW including a lesbian character isn’t one of them. But now that we’re on the subject. Calling it a “twist” in a marketing release is a mistake and part of a bigger problem than too many reboots. (1)

But y’know the 1st press release gave the reboot a feminist “twist”. So. Yeah. Let’s just all hope the actual script is filled with characters that are regarded and treated as equals in their effort to inspire a new generation. And that @TheCW fires their marketing dept soon.(2)

. @usweekly @people @PerezHilton any other questions? No don’t have your people call my people cuz my people are already calling you. (3)

In closing…. We wish them well. Again. 🔮

A lesbian couple will appear in this ad, even though the company got hate mail