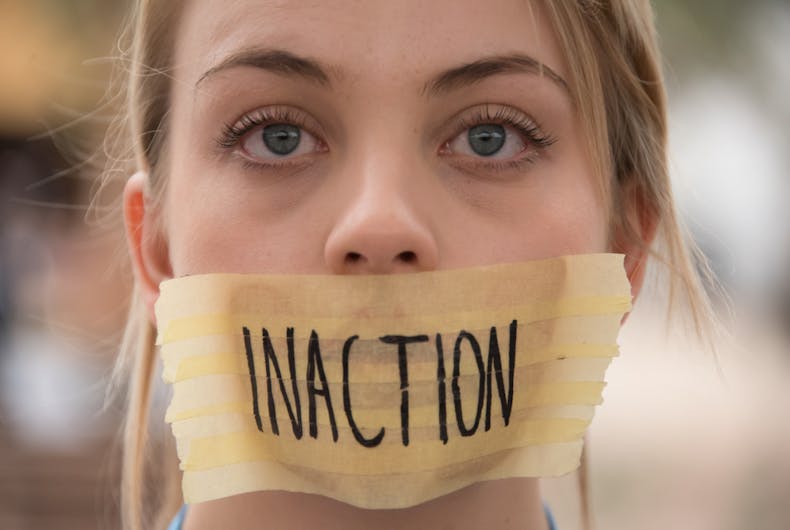 “We’re living through war, but where they’re living it’s peace time, and we’re all in the same country.”

This moving quote from Larry Kramer’s play, The Normal Heart, expressed how many of us felt throughout the early years of HIV/AIDS in the 1980s. Amidst this crisis, officials and others in our country perpetuated a process of collective denial by refusing to acknowledge the mere existence of this war in their attempts to silence people with HIV.

Larry’s quote came to mind recently as I watched the stirring voices of courageous young people taking to the podium to shout impassioned words over loud speakers and bull horns, saw young people falling to the pavement in front of the high black metal fences at the White House in symbolic death of a plague prematurely killing so many, and heard the cries and screams of parents and friends as they buried loved ones.

I could not help but imagine so many, too many, parallels with the early years of the HIV/AIDS plague prematurely killing so many during the latter quarter of the 20th century.

Within each succeeding social movement throughout our history, individuals in consort with others chisel wide new openings by which people enter and become involved. Adherents to these movement pass through the entry points most consistent with their skills set, ideology, and comfort level.

In both the movements to defeat HIV/AIDS and to reduce and eliminate gun violence, advocates have chiseled parallel entry points.

For example, in the fight for firearms safety, people are contacting legislators, writing letters and newspaper editorials, forming study groups, and engaging in other creative ways to raise issues.

Several organizations promote education and engage in lobbying efforts. We see, as well, an increasing number of social media groups dedicated to raising awareness on gun safety. Selective politicians sponsor legislation, some of which have passed into laws in specific states.

Overarching themes of governmental and larger societal denial, coupled with a dereliction of duty have made it a moral imperative as well as a survival strategy to organize for progressive and political social change.

In the social context surrounding both the AIDS and gun safety movements, people in positions of power have rationalized their failures to take effective actions by framing gun violence as “mental health” issues and AIDS as deviant “lifestyle” issues.

When the power structure initially had its proverbial back against the wall and felt compelled to give something in an attempt to appease as minimally as possible, it offered the scraps of “further investigating the problem,” banning bump stocks, and extending background checks.

In the 1990s, that amounted to allowing more people into clinical drug trials through “compassionate use” even though they may not have met the entrance criteria, funding free condoms, and permitting possibly one person with AIDS (POA) on some policy making committees.

The great abolitionist Frederick Douglass said in 1853, “If there is no struggle, there is no progress.” The point he was making was that individuals, institutions, and societies virtually never relinquish even a bit of power without challenge and conflict.

The mass murder by a fully-armed shooter at Marjory Stoneman Douglas High School in Parkland, Florida seemed to have provoked a tipping point ushering in the next development in a continuing movement to promote firearms safety in the United States: direct action led by a new generation of justifiably frightened and angry passionate young people, who have grown up since the tragic murders of students at Columbine High School, Virginia Tech, and Sandy Hook Elementary School.

The parallels with organizing around HIV/AIDS could not be more striking. But first, as a caveat, HIV remains today a global problem as a global pandemic. As a social movement, though, it stands at a different place compared with the Gun Safety Movement.

Throughout those early years of the plague, we had concrete and inspirational support from visionaries of times past and then present – marginalized people who worked throughout their lives to ensure a just and free society.

And why was the governmental response to HIV/AIDS so meager? According to Randy Shilts in his book And the Band Played On, “No one cared because it was homosexuals who were dying. Nobody came out and said it was all right for gays to drop dead; it was just that homosexuals didn’t seem to warrant the kind of urgent concern another set of victims would engender….Scientists didn’t care because there was little glory, fame, and funding to be had in this field….Nobody at the National Cancer Institute seemed to be in much of a hurry. The new syndrome clearly was a very low priority, even as it was becoming clear to more and more people that it threatened calamity.”

In the face of this threat, we didn’t just sit back. We mobilized. The women’s health-care empowerment movement predates AIDS, as recorded in the ground-breaking work, Our Bodies, Our Selves.

By the time the effects of HIV were first felt, a grassroots network of medical, social, political, and informational organizations had already been set in place. Some people, who under other circumstances would probably not have engaged in political organizing, were spurred into activism by the crisis.

LGBT and heterosexual people were in the forefront of a coordinated effort to provide care and support for people with HIV/AIDS. Existing LGBT community service centers expanded their services, while new centers were established dedicated to serving the needs of people HIV/AIDS.

These centers, sometimes referred to as AIDS Service Organizations (ASOs), provided counseling, education, medical consultation and advocacy, legal and financial assistance, and guidance through the dizzying maze of local and national agencies.

In addition, we must not overlook an irony. LGBT people developed safer sex strategies and educational campaigns and remain some of the leaders in prevention efforts. Just think about it: LGBT people teach heterosexual people how to decrease their risks of infection during sexual activity.

As important as all these initial organizing efforts were, some of us realized that we could advance only so far given the enormous backlash, and that we must do so much more to directly confront the crisis.

We charged the government with being unconcerned with the epidemic because the majority of HIV-related cases existed in what we called “The 4-H Club”: Homosexuals, Haitians, Heroin users, and people with Hemophilia – 3 of 4 groups that our society considered disposable.

We also faulted the very system on which U.S. medicine was based, and we declared that clinical drug trials and drug distribution procedures as then constructed were inhumane.

Subsequently, by 1986, the militant group known as ACT UP (AIDS Coalition to Unleash Power) organized under the banner “Silence = Death.”

“We are a nonpartisan group of diverse individuals united in anger and committed to direct action to end the AIDS crisis,” is how they began meetings of ACT UP chapters throughout the U.S., Canada, Europe, and Australia.

Updating 1960s-style movement strategies, ACT UP groups challenged what we regarded as an intransigent government, arrogant medical establishment, greedy pharmaceutical and insurance industries, and a frightened and apathetic populous. We also fought against the internalized oppression within our own communities.

A new era dawned March 24, 1987 when a handful of furious and committed AIDS activists staged a sit-in at rush hour on Wall Street. The following October, over half a million people descended on Washington, DC as part of the National March for Lesbian and Gay Rights.

Out of the March grew a unique coalition concerned with several progressive issues, though focused on AIDS. A new umbrella organization called ACT NOW (AIDS Coalition To Network, Organize, and Win) oversaw communications and planned actions on a national scale.

Based on a philosophy of direct, nonviolent action, ACT UP members conducted highly visible demonstrations often involving acts of civil disobedience in which participants often placed themselves at risk for arrest. Dramatic and creative visuals were often used to garner media and public attention.

In addition, ACT UP pushed for national anti-discrimination laws in terms of HIV status and sexual identity; protecting against mandatory HIV testing and quarantining; insurance and social security benefit protections; job and housing protections; freedom of immigration; and treatment for all incarcerated persons.

This agenda was controversial and, indeed, ACT UP and its tactics were often criticized, even from within the ranks of the larger LGBT community. ACT UP, however, lists several victories to its credit, though history will have to be the final judge of its ultimate effectiveness.

When looking back over the history of HIV, one thing seems certain. LGBT people have been in the forefront of organizing since physicians first recognized the syndrome. We are there now working on the frontlines and we will continue to be there giving our knowledge, our compassion, our funds, and our energy until HIV no longer poses a significant threat to the health of anyone on this planet.

I’m reminded of the poignant words of Harry Hay, one of the founders of the Mattachine Society — an organization established first in Los Angeles during the 1950s – and the Radical Faeries – a queer spiritual movement.

Hay believed that those of us in the LGBTQ community possess a special “gay sensibility” giving us a unique vision, a creative spirit that, if allowed to thrive unimpeded, can bestow remarkable benefits on society.

Unfortunately, because of the oppressive environment in which most of us are forced to live, he concluded, “We pulled the ugly green frog skin of heterosexual conformity over us, and that’s how we got through high school with a full set of teeth. We know how to live through their eyes. We can always play their games, but are we denying ourselves by doing this? If you’re going to carry the skin of conformity over you, you are going to suppress the beautiful prince or princess within you.”

I would go further than Harry, though, by asserting that each of us, from all backgrounds and identities, have within us a unique vision and creative spirit. So, in these challenging times, whether around issues of gun violence, or elsewhere, if you find yourself beginning to pull that ugly green frog skin of conformity and apathy over your head, look into the mirror and scrub it away.

In so doing, you will be pushing the boundaries ever further from the center. Your vision can create a new tomorrow, a safer and more just tomorrow, a tomorrow where we will see the end to the list of names on the AIDS Memorial Quilt, and where we will cease inscribing names on the directory of people cut down by violence in all its forms, in a tomorrow that is truly better and more equitable than today.