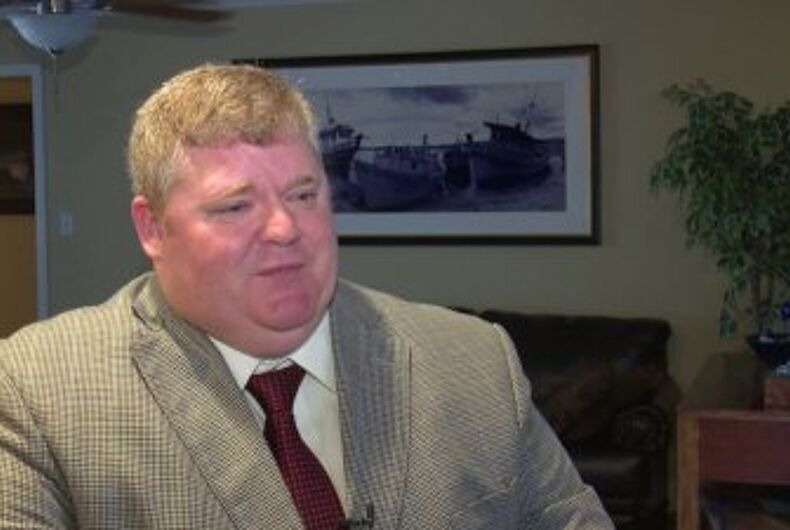 Jason White will run as an independent after claiming he was denied a chance to run as a Republican.Photo: Screenshot

A former Athens, Alabama police officer says homophobic sentiment denied him a place on the GOP ticket to run for sheriff.

40-year-old Jason White claims the Limestone County Republican Executive Committee in Limestone County, Alabama denied him a place on the ticket despite his prestigious record because he’s married to a man. The committee has declined to comment on the reasons for denying White the nomination.

A former police officer, White now runs a private security company. He unsuccessfully ran for sheriff in 2002 while married to a woman. The two subsequently divorced when White came out as gay. Today, he lives with his husband Brett Jones, noted as the nation’s first gay Navy Seal, and their teenage son. To qualify as a candidate for sheriff, White says he only needed to fill out paperwork which included questions about if he’d voted for a Democrat, and about his sexuality. When meeting with the Limestone County Republican Executive Committee, White claims the group had more questions about his sexuality than anything else.

“I said the fact I was fired and that I’m gay,” White explained, in answer to a question about his potential weaknesses as a candidate.

“You’d think I had stabbed them,” White claims.

The GOP of Limestone have yet to find another candidate to run for sheriff if they hope to defeat the longtime Democratic incumbent, Mike Blakely. White also says he intends to run as a third party candidate. The news comes at a time when anti-LGBT sentiment from the Republican Party has taken the national stage, with Donald Trump paving the way for healthcare providers to deny services to LGBT individuals under the guise of religious freedom. Still, the rising homophobic sentiment in the political system does has not deterred White.

Oscar nominations bring new level of diversity this year. But is it enough?