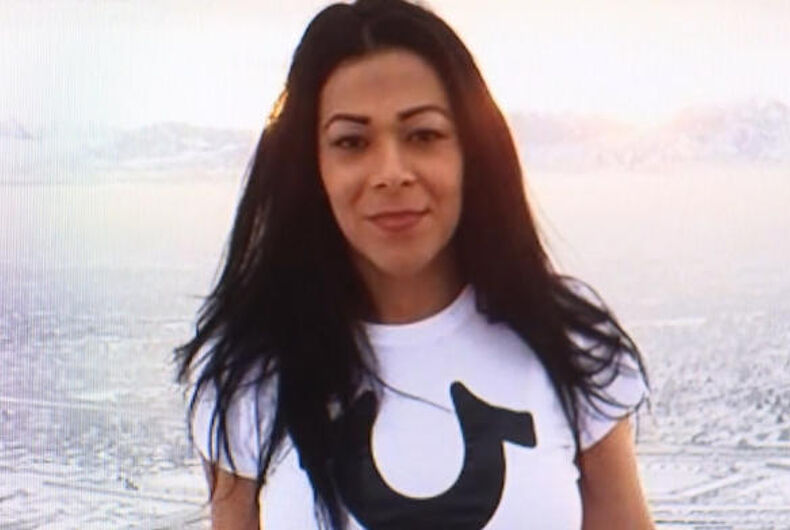 We aren’t even halfway through the first month of January, but already we have our second reported transgender murder of the year.

Viccky Gutierrez died after her apartment in Los Angeles caught fire on Wednesday morning while she and her dog were trapped inside. Los Angeles Fire Department officials have ruled that the fire was suspicious, and the Los Angeles Police Department’s West Bureau Homicide investigators are looking into her death.

Next door neighbor Oscar Manzano told the local ABC affiliate that he attempted to rescue her before the intensity of the fire made it impossible.

Manzano reported that she had been experiencing problems with other neighbors before her death. He said that someone had spray painted a slur on the door of her apartment because she was transgender.

A friend of Gutierrez, who grew up with her in Honduras, said that she had been in the country for three years and that she was married to a man who worked in the Bay Area and traveled back and forth.

Gutierrez was said to have been sending money back home to her family.

Her sister told Telemundo 52 that they were devastated by news of her death.

“She was the foundation of this home,” she said. “She was very responsible.”

A vigil will be held tonight at 7 p.m. in front of the apartment building, at 1660 Venice Blvd.

Her dog is reportedly still missing, after escaping during the fire.

Anyone with information regarding Gutierrez’s death is encouraged to contact the LAPD at 213-382-9102.

Earlier this month, Christa Leigh Steele-Knudslien, who founded the Miss Trans America Pageant, became the first reported transgender murder of the year in the United States. Her husband, Mark Steele-Knudslien, has been charged.

Last month, a transgender woman died in a house fire in Michigan that officials are investigating as possibly suspicious.

Was Chelsea Handler’s tweet about Lindsey Graham homophobic or on point?

U.S. Ambassador to Panama resigns, saying he can no longer serve under Trump