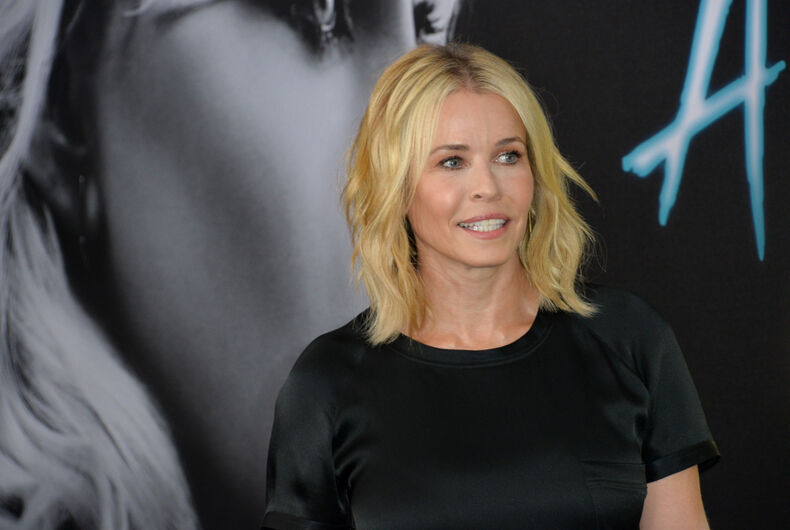 Comedian Chelsea Handler has come under fire for a tweet she sent yesterday mocking Republican Senator Lindsey Graham for praising Trump after a White House meeting about immigration.

The meeting has since devolved into another racist embarrassment for the administration as reports that Trump called countries like Haiti “shitholes” and asked why we couldn’t encourage more Norwegians to immigrate to the United States. (Maybe it’s because Norway has universal health care and free college education?)

“Hey, @LindseyGrahamSC what kind of dick sucking video do they have on you for you 2 be acting like this? Wouldn’t coming out be more honorable?” Handler tweeted.

Graham, who has never married, denies that he is gay but his sexuality is an open secret in Washington.

Republicans were quick to clutch their pearls at the joke with one of the queer community’s most purposefully offensive Republican cheerleaders, Chris Barron, leading the charge. Barron was a co-founder of the now-defunct far right organization GOProud.

Holy, fuck fuck. I just the video of trumps bipartisan “meeting” yesterday. Hey, @LindseyGrahamSC what kind of dick sucking video do they have on you for you 2 be acting like this? Wouldn’t coming out be more honorable?

Nice gay bashing bigot you have here liberals. You guys must be so proud. Total trash. https://t.co/DqBodyErjI

Just reported this explicitly anti-gay tweet. Odds on twitter doing something? Less than zero. If a conservative said this they would be suspended immediately. https://t.co/DqBodymPV8

This gets a 7 day suspension but gay-baiting homophobic garbage from @chelseahandler gets nothing. Pathetic. https://t.co/293IpKpAXb

In the end, Barron summed up the tempest in a teapot best all on his own.

Faux outrage is the best outrage.

Mom sent his thirst trap photos to a woodworker. What happened next will leave you rolling.

Viccky Gutierrez becomes the second known transgender murder in the U.S. this year