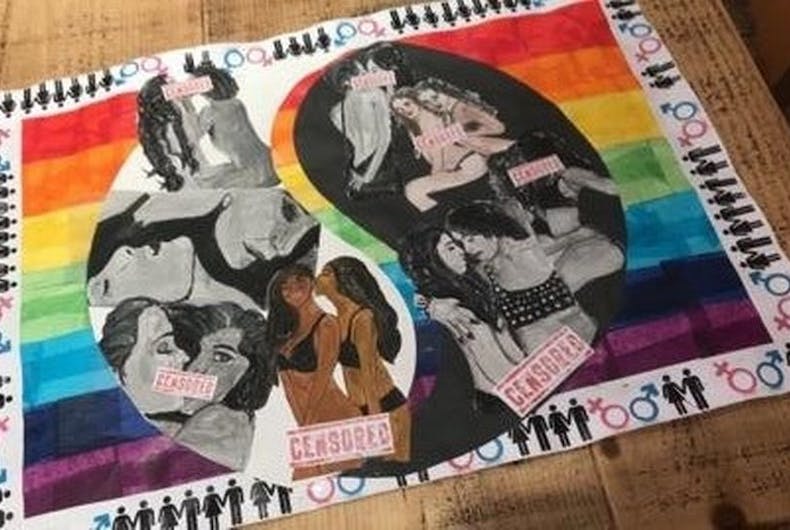 Megan Angus said that she worked for 40 hours on the project for an art class at the Laurence Jackson School in Guisborough, England. The project was supposed to be about an “outsider” group.

“I did same sex relationships as they seem to be out of place in society,” she told GazetteLive.

“I wanted to get across that it shouldn’t be frowned upon and it shows girls can be together. It is something I feel passionate about.”

She turned in her project and got a B in the class. But when she went to pick it up this past week, she found that it had been censored.

“Can’t get more of a homophobic school than Laurence Jackson school sticking censored all over my work not getting my permission,” Angus posted on Facebook.

The stickers ruined her painting, because she can’t take them off without ripping the paper or pulling off the paint.

A spokesperson for the Laurence Jackson School told GazetteLive that it is “in no way homophobic.”

“As a secondary school, we needed to be mindful of the impact this may have on younger students,” the spokesperson said. “Sexually explicit images of any nature would have been censored if displayed.”

Angus posted an un-censored picture of her painting on Facebook, showing that most of the stickers were placed on images of two women kissing.

The school might actually believe that their actions weren’t homophobic here, but it’s hard to believe that a school would censor an image of a boy and a girl kissing.

This is because a lot of homophobia isn’t intentional or conscious. Same-sex relationships are assumed to be deviant, and people often see something graphic when looking at rather tame displays of affection between two women or two men.

Angus has left the school and now works as a lifeguard.

A once-a-week HIV pill could be coming soon