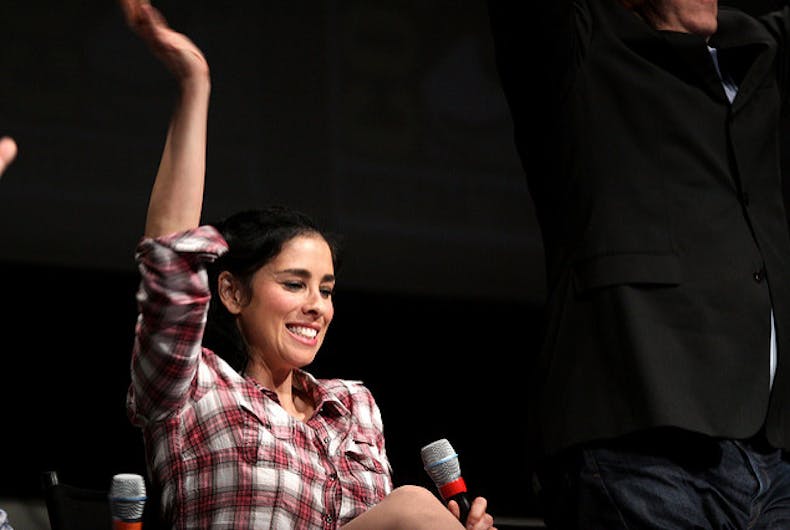 Sarah Silverman has everyone cheering for her beautiful response to a troll. Photo: Gage Skidmore (CC 2.0 license)

Sarah Silverman is showing everyone the power of not taking the bait, but instead turning to empathy, after her response to a Twitter troll helped turn the man’s life around.

Silverman tweeted out a profile of her in Bust, in which she talks about her sincere attempts to understand Trump supporters. A Twitter user responded to that tweet, wondering at her ability to understand the other side. She tweeted back that she was open to understanding, which resulted in yet another Twitter user, Jeremy Jamrozy, to throw a misogynistic insult her way.

While a lesser person might have gotten into a screaming match with the troll, or called him out so their fans could go after them, or even just ignore the comment and keep it moving, Silverman proved she really is trying to understand where others are coming from by looking at his timeline.

I believe in you. I read ur timeline & I see what ur doing & your rage is thinly veiled pain. But u know that. I know this feeling. Ps My back Fucking sux too. see what happens when u choose love. I see it in you.

Jamrozy was instantly disarmed and opened up about his past, confirming that he was in pain, even more than was immediately apparent.

I can’t choose love. A man that resembles Kevin spacey took that away when I was 8. I can’t find peace if I could find that guy who ripped my body who stripped my innocence I’d kill him. He fucked me up and I’m poor so its hard to get help.

I can’t imagine your rage. Just reading that makes me want to do bad things. Stand by

She asked if he was using heroin, since he identifies as a “junkie” in his Twitter bio, but he confirmed that he does not, but instead uses marijuana for pain management. She also encouraged him to seek out abuse survivor support groups, which he said he would do.

Good. I want to kill him too so I can’t imagine your rage. All I know is this rage- and even if you could kill him— it’s punishing yourself. And you don’t deserve punishment. You deserve support. Go to one of these support groups. You might meet ur best bros there.

He also apologized for his original tweet to her.

Im so psyched you’ll go. KEEP ME POSTED. Don’t give up on yourself. Be brave enough to risk getting burned. It’s what happens when u fight for yourself. But it’s worth it. I promise.

Silverman assured him she didn’t care, and offered up some advice she received from her therapist.

Dood I don’t care. I’m fine. I see something in you. My gut tells me you could have a great life. My shrink says we don’t get what we want, we get what we think we deserve. I’m telling you, you deserve so much more than you know.

Silverman is also leveraging her reach to try to get him the help he needs, bringing attention to a GoFundMe campaign that quickly surpassed its goal as well as putting a call out for professionals who might be able to lend their expertise.

Yo SAN ANTONIO! Any kickass back/neck care specialists willing 2 help my friend @jeremy_jamrozy He has several slipped discs, no insurance, & can’t work bc of severe pain. Let’s get him back on his feet!! Who’s in?

Jeremy went for a consult and it’s worse than we hoped. If you’re so inclined, help get him on his feet and working again.
He’s in San Antonio if you’re an actual expert that can help with ur skills.. https://t.co/M61SdGWZh9

Anyone in the San Antonio area that can help Jeremy? He’s in immense back pain and unable to work https://t.co/v1IrcWf3ir

He has thanked those who have reached out to help get him through this difficult time.

Thank you to all the support financially, emotionally, and donations. This is more than I could have wished for. Thank you nicos organics I received ur package am excited to try the products out. Thank u everyone. U showed me a lot within a few days. Love u all

And he reports that he is getting help.

Thanks to everyone for their love donations which I must spend on pain management. I'm also going to a chiropractor. Will go to sexual assault groups soon they said they'd call me you are all amazing lets pay it foward

“I was once a giving and nice person, but too many things destroyed that and I became bitter and hateful,” Jamrozy told My San Antonio. “Then Sarah showed me the way. Don’t get me wrong, I still got a long way to go, but it’s a start.”