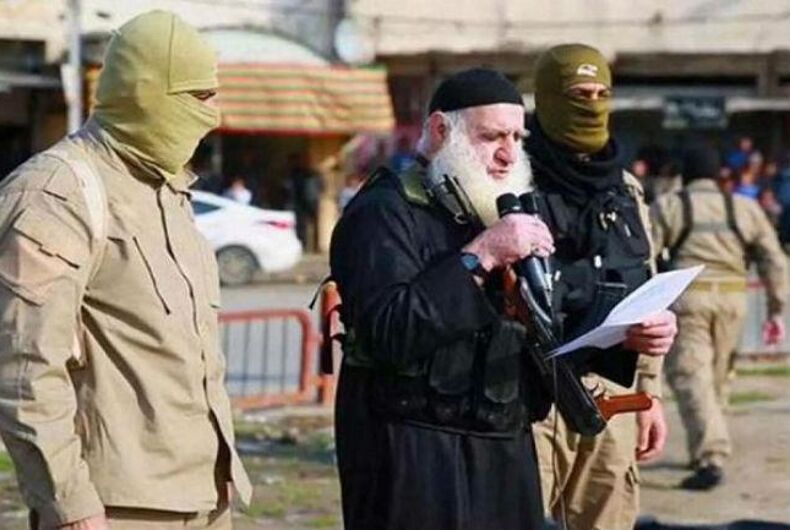 The ISIS executioner Abu Omer, who was captured by Iraqi forces in Mosul following a civilian tip, bribed his way out of prison within minutes of his arrest.

Omer, also known as “White Beard,” had appeared in a number of execution videos, where gay and bisexual men were beheaded or stoned to death. At the time of his arrest, a picture of him with a member of the Iraqi forces appeared on social media, and adviser to Middle Eastern governments and the Iraqi government on ISIS matters confirmed the validity of the reports to Newsweek.

“I was in Mosul when a force from police intelligence arrested a man. After questioning they were told he was the mufti for the right bank of the [river in the] city – an ISIS member,” Zuheir Hazzen el-Jaburi, a local official, told Iraq News.

“We asked people who he was, and they proved he really was ISIS’ mufti. After he was arrested, he left a motorbike behind. An hour later we saw the motorbike was no longer there,” he added. “We inquired about it. They said he was released 10 minutes earlier after he paid 75 notes [$7,500].”

He said that this is not the first case of a terrorist being “released due to corruption.”

UN Ambassador Nadia Murad responded to the news on Twitter and called for justice, and for a United Nations Security Council resolution to be immediately implemented.

We heard from media that this ISIS terrorist detainee who used to slaughter people in Mosul is now set free by some corrupt officials. We ask for justice, we demand UNSC resolution to be implemented immediately. pic.twitter.com/JNucjjV0xq