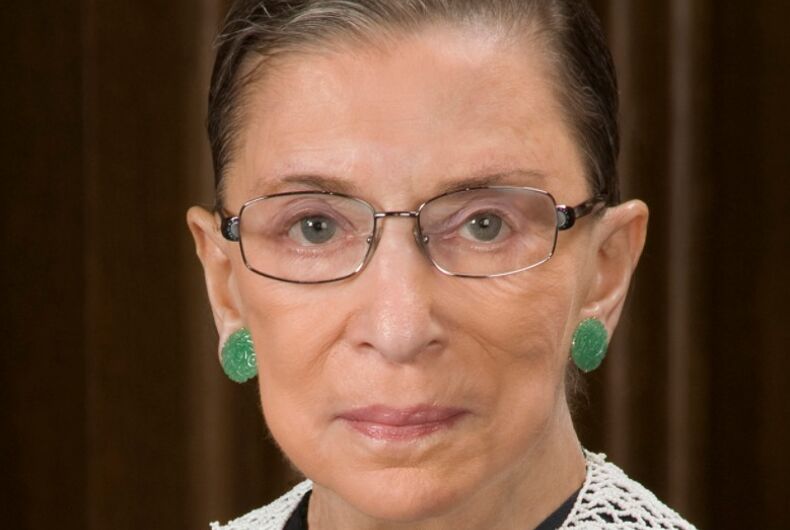 Supreme Court Justice Ruth Bader Ginsburg has said that she intends to stay on the court as long as she is able.

“As long as I can do the job full steam, I will be here,” she told the audience at a Sundance “Cinema Talks” conversation on Sunday. She added that her health was “very good.”

The 84 year-old has already hired law clerks for the 2018 and 2019 terms. The move followed on the heels of President Donald Trump calling on her to resign, after she openly criticized him during the 2016 presidential campaign.

Ginsburg  called him a “faker” and charging that he had “no consistency” with what he said.

Trump, as you might imagine, did not take that well.

Justice Ginsburg of the U.S. Supreme Court has embarrassed all by making very dumb political statements about me. Her mind is shot – resign!

Ginsburg ruled in favor of marriage equality and is seen as likely to side with LGBTQ rights in the First Amendment defense put forward during Masterpiece Cakeshop, Ltd. v. Colorado Civil Rights Commission.

In that case, baker Jack Phillips is arguing that making a cake for a same-sex wedding would violate his First Amendment rights to free speech.

Ginsburg also addressed the “Me Too” movement during the conversation on Sunday.

“I think it’s about time,” she said. “For so long women were silent, thinking there was nothing you could about it. But now the law is on the side of women or men who encounter harassment, and that’s big thing.”

She also revealed herself to be a fan of the movie Call Me by Your Name.

“It’s a beautiful film,” she said of the Globes-winning coming of age tale led by Timothee Chalamet and Armie Hammer. “I have to find out where in Italy they filmed it

Will LGBTQ inclusion be a factor as Amazon shops for its second headquarters?