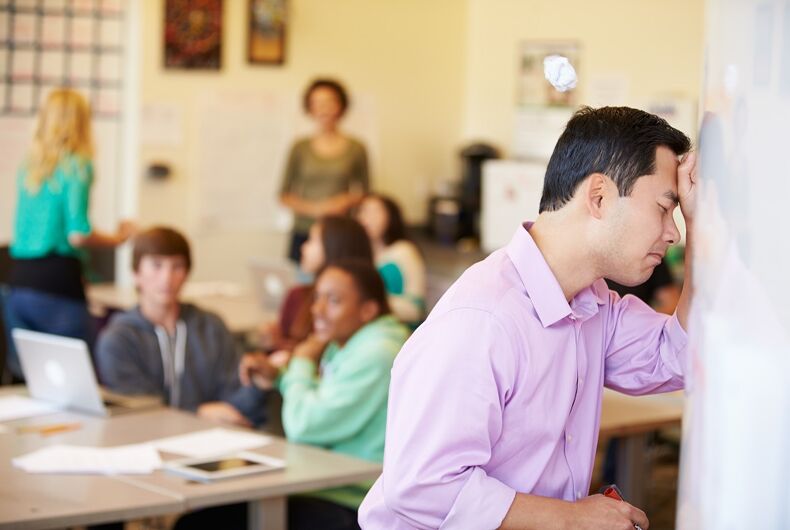 A Spanish teacher who sued the school he worked at settled his case for $110,000.

Kevin McManus started working at the Somerset County Vocational & Technical High School in New Jersey in 2008, and the problems began when a student outed him in 2011.

According to the suit, several students would taunt him with statements like “Don’t drop the soap” and “Do you like fudge?” and “Don’t choke on that dick.” The students were constantly disruptive, and his classroom suffered.

McManus reported the harassment to the school’s disciplinary coordinator Jamie Morales, and the lawsuit says that Morales failed to do anything about it.

Instead, McManus alleges that Morales told one of the students who was particularly homophobic to “keep doing what you’re doing” and “document Mr. McManus’ activity during class.”

He also reported the harassment to Principal Diane Ziegler, who said, “Professional development in the area [classroom management] is encouraged.”

When he filed a complaint with the New Jersey Division on Civil Rights, he says that the school retaliated by restricting his use of personal days and not letting him take leaves of absence for medical conditions caused by the constant harassment.

In March 2014, Superintendent Chrys Harttraft asked for McManus’s resignation. The suit alleges that Harttraft “did not believe that [McManus] was ‘homosexual’ because ‘he is not effeminate.'”

He eventually resigned in November 2014.

The settlement contains a confidentiality agreement and no admission of wrongdoing on the part of the school. McManus will get about $67,000 of the $110,000, with the rest going to attorney fees.