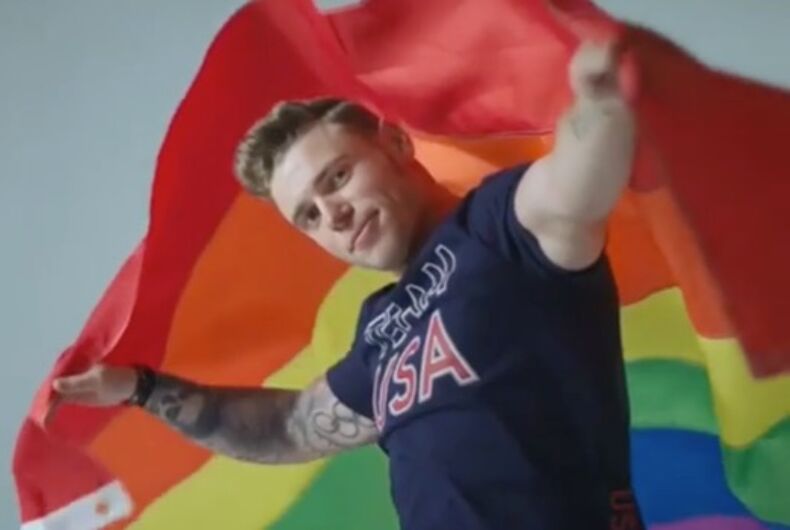 Kenworthy placed second at the last freeski slopestyle qualifier yesterday at Mammoth Mountain, which, combined with a first place finish at a qualifier last week, gave him a spot on the winter U.S. Olympic team going to South Korea.

This will be the second time Kenworthy has skied at the Olympics. Four years ago in Sochi, Russia, he got the silver medal in slopestyle, the first year the sport was an Olympic event.

And just before he qualified this year, he got an endorsement deal for shampoo.

Kenworthy will appear in a series of ads for Head & Shoulders in front of a rainbow flag.

“You may have already spotted this on TV but I am SO excited to finally be able to share my Head & Shoulders commercial with y’all!” Kenworthy said on Instagram. “Holding up those rainbow colors on national TV makes me feel PROUD!”

You may have already spotted this on TV but I am SO excited to finally be able to share my Head & Shoulders commercial with y’all! Holding up those rainbow colors on national TV makes me feel PROUD! ❤️💛💚💙💜 #ShouldersOfGreatness

The shampoo company commended him on both his athletic skill and his pride.

“Head & Shoulders celebrates how Kenworthy carries pride in himself, his country, his family and his community, allowing him to achieve greatness as he looks ahead toward Pyeongchang,” Head & Shoulders said in a statement.

A year after competing in the Olympics in Sochi, Kenworthy came out in an interview with ESPN. “I never got to be proud of what I did in Sochi because I felt so horrible about what I didn’t do,” he said.

He also talked about heterosexism in competitive skiing.

“In skiing, there’s such an alpha male thing about pulling the hottest chicks,” he said. “I know hooking up with hot girls doesn’t sound like the worst thing in the world. But I literally would sleep with a girl and then cry about it afterward. I’m like, ‘What am I doing? I don’t know what I’m doing.’”

Kenworthy is the second gay athlete to qualify for the 2018 U.S. Olympic delegation to Pyeongchang, after figure skater Adam Rippon.