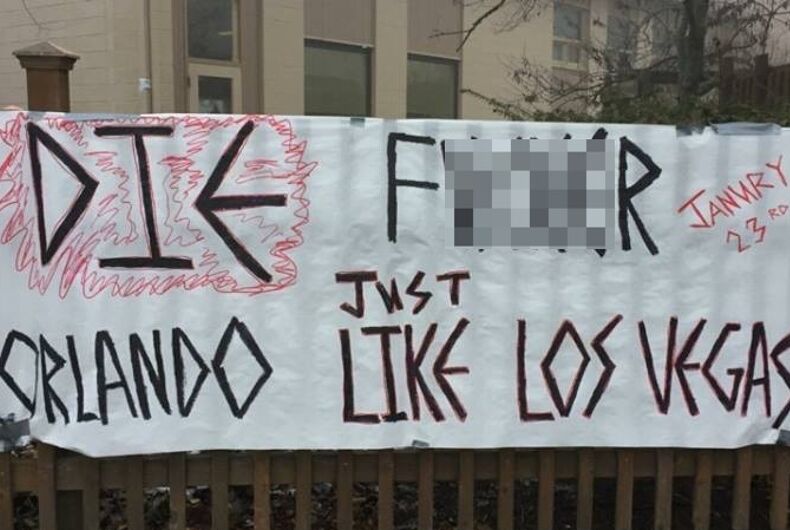 The FBI is investigating after two banners were hung outside of the Unitarian Universalist Church in West Lafayette, Indiana that seem to warn of a planned terrorist attack on January 23. The two racist and anti-gay banners were posted after the church hosted a “Resistance Fair” the day before.

West Lafayette Police Chief Jason Dombkowski says his department and the FBI have also alerted police in Orlando of the situation.

The other banner targeted singer Jackson Browne for his opposition to Trump and dedication to progressive causes. It included a list of racial and anti-gay slurs after the singer’s name.

Browne has a concert planned in Orlando on January 23.

The banners were removed by law enforcement for forensic evidence according to local news station WFLI. Authorities say extra officers will be patrolling the area.

West Lafayette Mayor John Dennis was blunt about his emotions while speaking to the Journal & Courier.

“I’m so f—ing mad,” he said. “West Lafayette has been and always will be an open and welcoming community. We will not allow our embracing of all that is right to be targeted by those who feel empowered to deliver a message of hate, violence and exclusivity.”

Anyone with information is asked to call the West Lafayette Police Department at (765) 775-5200.

Stephen Miller is behind the ill-fated government shutdown