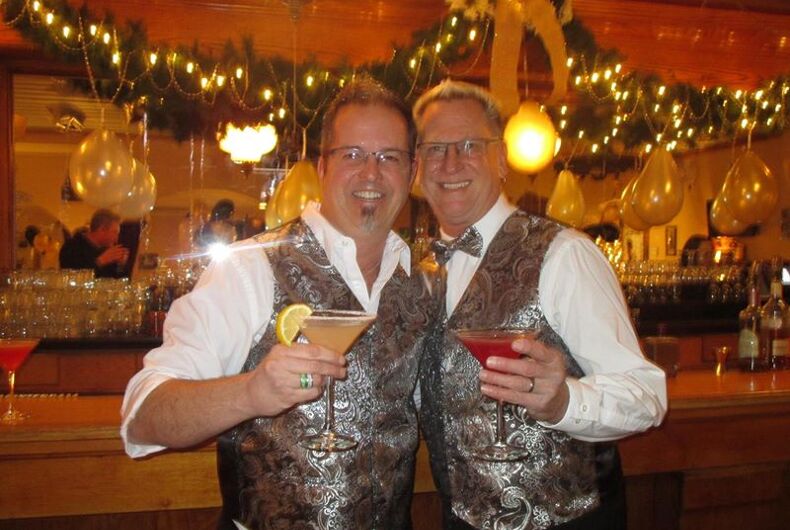 A gay couple filed a federal lawsuit against their town, which they accuse of discriminating against them as they tried to establish a restaurant.

Marc and Rusty Andrus bought an old property in Thayne, Wyoming (population 366), in 2015. They remodeled it and brought it up to code, with the intention of opening a family restaurant called Rustlers Restaurant and Saloon. And they applied for a bar and grille license.

But in the two years since they bought the space, they say that the town gave them more trouble than it gives other restaurant owners. Their lawsuit says that they were discriminated against because they’re gay, violating their due process rights.

They also say that the Church of Jesus Christ of Latter-Day Saints had influence on the town’s decisions, violated the Establishment Clause of the First Amendment.

They went to a town council meeting in early 2016, and that’s when they say they understood that they would be held to a different standard than other business owners.

“Plaintiffs were subjected to verbal accusations and hostility from multiple members of the Town Council. Defendant Council Members Joe Heward and Lorell Woolley repeatedly and very publicly accused Plaintiffs of being deceitful without any basis for such accusations whatsoever,” the suit reads.

The citizens who attended the meeting made “hostile gay slurs” about the Andruses.

At the meeting, Mayor DeLand Lainhart said that the town would collect sales tax receipts monthly (instead of yearly, as prescribed by state law) and threatened to close the bar if the appropriate food-to-alcohol sales ratio was not maintained.

Lainhard also said that he would enter the restaurant regularly to make sure the grille was on and ordered the Andruses to build a fence even though the town’s regulations don’t require it.

But the council approved their license, but charged them $10,500 instead of the standard $1,500. And they built the fence.

A month later, Lainhard went to the restaurant and told the Andruses that a local member of the Mormon clergy approved giving them their license. When they asked why that mattered, he allegedly responded, “[This religious leader] represented the people of Thayne.”

In the year that followed, the Andruses said that they were subjected to homophobic abuse by random drunkards who walked into the restaurant, and the town did nothing to stop it. Drunk patrons leaving nearby bars drove a car through their fence twice. They also say the town didn’t enforce parking ordinances appropriately.

The Andruses also accused the town of not listing them on the town’s website like other restaurants. They are now included on the site.

Lainhard has not commented on the lawsuit, and the Andruses have not discussed it with the press.