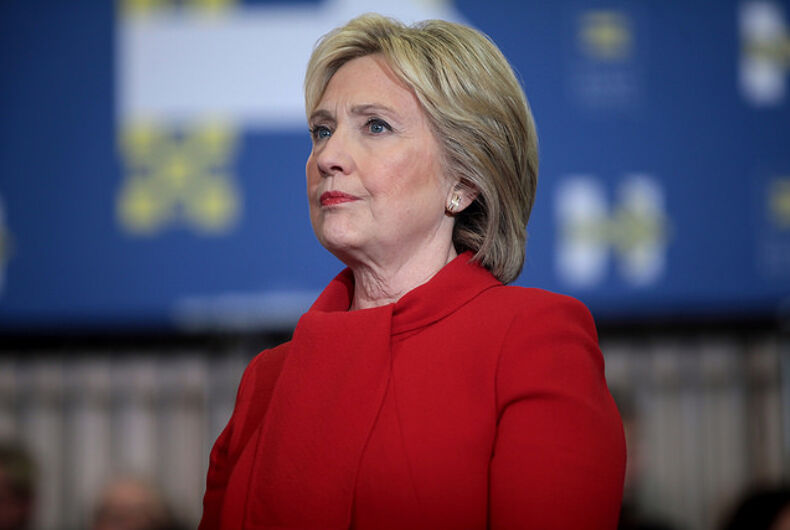 The Department of Justice is reportedly actively investigating the Clinton Foundation to determine if donors were promised special access to Hillary Clinton while she was secretary of state in exchange for their donations.

The Hill broke the story, citing officials speaking on the condition of anonymity who said the new inquiry has begun with FBI agents in Little Rock, Arkansas, where Bill and Hillary Clinton’s foundation got its start, taking the lead.

One witness has already been interviewed, they said, and more activities are expected in the coming weeks.

In addition to determining if the charity was involved in any pay-to-play politics, officials are also trying to determine if any other illegal activities took place. This could include whether any tax-exempt assets were converted for personal or political use and whether the foundation complied with applicable tax laws, officials told The Hill.

A witness said to have been interviewed by FBI agents in the matter called the proceeding “extremely professional and unquestionably thorough,” and confirmed the questions revolved around the possibility that access and special favors were being offered to those who gave to the charity.

Clinton spokesperson Nick Merrill criticized the FBI for reopening the investigation, which stalled prior to the 2016 election and was assumed by most to be beyond her, calling it “disgraceful” and a “sham.”

He also suggested that it was done as nothing more than a distraction from the FBI election tampering and collusion investigation into connections between the Trump administration and Russia.

“This is a philanthropy that does life-changing work, which Republicans have tried to turn into a political football. It began with a now long-debunked project spearheaded by Steve Bannon during the presidential campaign,” he added. “It continues with Jeff Sessions doing Trump’s bidding by heeding his calls to meddle with a department that is supposed to function independently.”

Trump responded to the news on Twitter, claiming collusion with Russia has been proven to be a hoax (it hasn’t), that Clinton is colluding with the FBI and Russia (what?!), and took shots at both the media (of course), as well as the new tell-all book by Michael Wolff, Fire and Fury.

Well, now that collusion with Russia is proving to be a total hoax and the only collusion is with Hillary Clinton and the FBI/Russia, the Fake News Media (Mainstream) and this phony new book are hitting out at every new front imaginable. They should try winning an election. Sad!

Naturally, he wasn’t the only one with feelings about the whole thing that he wanted to air on Twitter.

When the President of the US directs his Justice Department to investigate his opponent (Clinton Foundation), whom he seems to have an infatuation about, when that opponent had been cleared of any wrongdoing already, we are no longer America

We are officially a Banana Republic!

Hallmark of authoritarianism: going after your political opponents. That Sessions is willing to play along means he is complicit in this erosion of our democracy. https://t.co/s1Z95tOnuJ

For those of you scoffing at the idea we’re losing our democracy:

What Trump’s FBI is doing to the Clinton Foundation is straight from Putin’s playbook. He fabricates charges against political enemies to exclude them from politics. Look at Alexei Navalny.

If you want to investigate the Clinton Foundation for “Pay-to-Play”, how about also forcing Trump to release his Mar-a-Lago visitor logs so we can see how many of his policies have been favorable to his “paying” members? #FridayFeeling