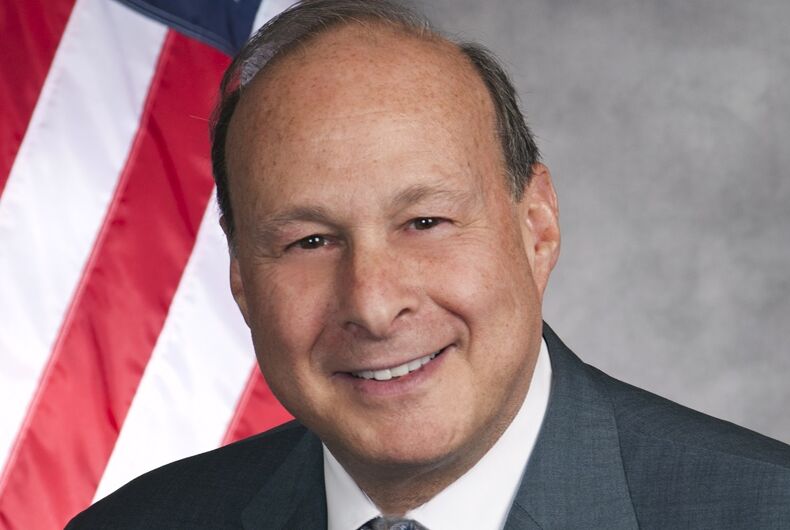 Photo: Wikipedia
Massachusetts senate president Stanley C.  Rosenberg, 68, looked heartbroken, shocked and devastated during an impromptu press conference outside of his office at the State House where he publicly addressed allegations that his spouse, Bryon Hefner, 38, groped and assaulted four men who do business before the senate.
“My heart goes out to anyone who may have been hurt, and I am committed to helping anyone who has been harmed,’’ the Democrat read from his statement in front of a bevy of reporters.  “This has been the most difficult time in my political life, and in my personal life.’’
Over a three year period, Hefner’s accusers said he grabbed their genitals, and one said Hefner kissed him against his will. Because Hefner boasted about his tremendous influence on Rosenberg the men felt powerless to come forth until the recent rush of men and women  stepping forward saying “Me, too.”

While three of the accusers allege the incidents happened with Rosenberg mere feet away there is no evidence that Rosenberg knew about the assaults. Regrettably, Rosenberg has temporarily stepped down from his post while the Senate investigates if Hefner interfered with the State House’s internal affairs, which Rosenberg emphatically denied.
Many, myself included, are asking: is it fair to hold Rosenberg responsible for the actions of his spouse?
“If it were him being accused, it would be different, but it’s against his husband,” Steve Chojnacki, 61, of Amherst told the Globe. “Should he really step down if he hasn’t committed a crime?”
Rosenberg is loved and respected by his colleagues as well as out in the community. He’s a policy wonk who’s credited with helping “the Senate to become less insular and more responsive to constituents.” His decades of service has been exemplary – Chair of the Election Laws Committee, Chair of the Banking Committee, Chair of Senate Ways and Means Committee, Assistant Majority Leader, and the Senate’s first President Pro Tempore, to name a few of his posts.
Rosenberg, who credits his coming out publicly to Hefner, is the first openly gay senate president, making him the highest-ranking elected LGBTQ official in the state’s history.  And, as huge advocate of LGBTQ civil rights, Rosenberg was one of the key architects in the same-sex marriage battle in the State House.
As a spouse, Rosenberg has a fully developed and autonomous public identity of his own. He is not residing as a subservient shadow of Hefner, which is quite laughable as I think about it.
“It’s not really his fault,” Paul Klemer, 58, also of Amherst told the Globe. I totally agree with Klemer.

Some years ago Rosenberg wrote a letter to his fellow Democratic senators that he had “enforced a firewall between my private life and the business of the Senate” when Hefner, his then-fiancee, purported to be involved with the internal affairs of Senate business.
Sadly, however, a bevy of aspersions are always cast on spouses, mostly wives, for the misdeeds, infidelities, and predatory behaviors of their husbands.
But truth be told, cheating spouses behave the way they do for a sundry of reasons: insecurity, anger, revenge, jealously, lack of maturity, lack of impulse control, to end a marriage referred to as an “exit affair,” belief that sexting and flirting are harmless, co-occurring issues like drugs and alcohol impairing judgment, childhood abuse, and simply not knowing the difference between romantic intensity and long-term love, to name just a few.
So why is Rosenberg’s in the hot seat with the Senate for Hefner’s behavior?
Some argue for transparency in allowing victims to come forth without the fear of reprisal. Others argue for the integrity of the Senate to give a public display of zero tolerance for sexual harassment at the workplace and to restore public confidence. And many others simply want to know how could Rosenberg not know of Hefner’s egregious behavior, suggesting Rosenberg was “complicit,” the 2017 word of the year.
“Even though, based on what little I have been told, these allegations do not involve members or employees of the Senate and did not occur in the State House, I take them seriously,”  Rosenberg read from his statement. “To the best of my recollection I was not approached by anyone with complaints during or after the alleged incidents made in this article or I would have tried to intervene.”
Trying to disentangle Rosenberg’s innocence from Hefner’s transgressions is a classic example of the shackles and double binds placed on spouses.
Rosenberg’s political career, legacy, and legitimacy as an honest and trustworthy elected official moving forward are tarnished, if not tanked,  in my opinion. And it’s not for anything he did but rather for the vile behavior of his spouse.
Commentary
Gay, Massachusetts, Senate

This Arkansas judge got tired of waiting for equality, so he shut things down