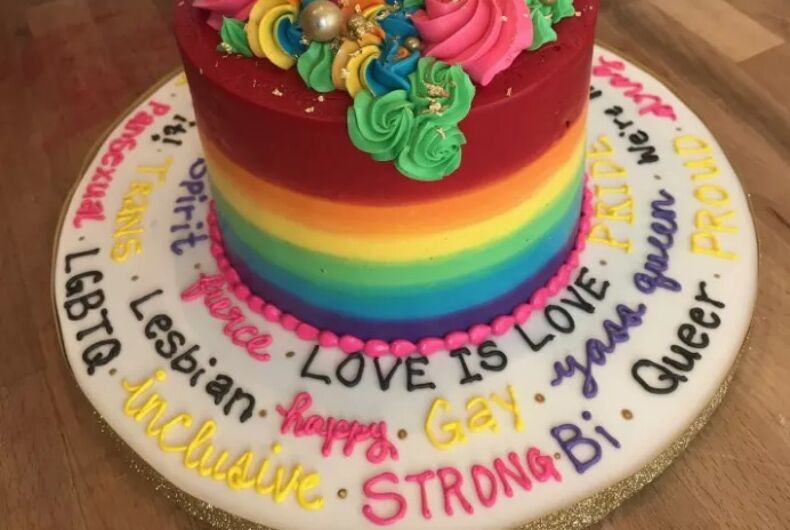 Chris Farias ordered this cake to celebrate a year of engagement to his fiancé and to make a statement about equality.Photo: Chris Farias, via BuzzFeed

Gay wedding cakes are much in the news these days, with the U.S. Supreme Court set to decide on a case involving a bakery in Colorado, and the state of California suing yet another anti-gay bakery there.

Meanwhile, in Canada, creative director Chris Farias decided to both celebrate one year of engagement to his fiancé Jared as well as make a statement. He did so by calling up Cake and Loaf Bakery, in Hamilton, and asking them to make him the gayest cake they could muster. He said the bakery excitedly accepted the challenge.

The results, as you can see, were downright divine.

“I am in tears right now I’m so happy,” he wrote on Facebook.

“Being part of the LGBTQ+ community isn’t easy for many,” he added. “And that’s an huge understatement. But I am proud of who I am, and how far WE have come. I am proud to be a gay Canadian who can order a cake and not get turned down because of who I love. I love this country, and I love my community.”

“If you believe that #LoveIsLove, please share, and show our neighbours to the south that we support them,” he continued. “That we empathize with their struggles. That Canada is loud and proud and will make them any cake their heart desires.”

Making this whole story even cooler is the fact that the baker, Quinn Pallister, told BuzzFeed she wanted to make something special because she has two moms, and for her “it’s really important…that everybody feels included.”

“I never got to make them a wedding cake, so this was like making something for everybody that’s part of the community,” she added.

Owner Nicole Miller said she made a wedding cake a few years ago for a gay couple who had been denied by other bakeries in the area.

“We really want to embody a positive, all-inclusive safe space for all of our employees and customers,” she said.