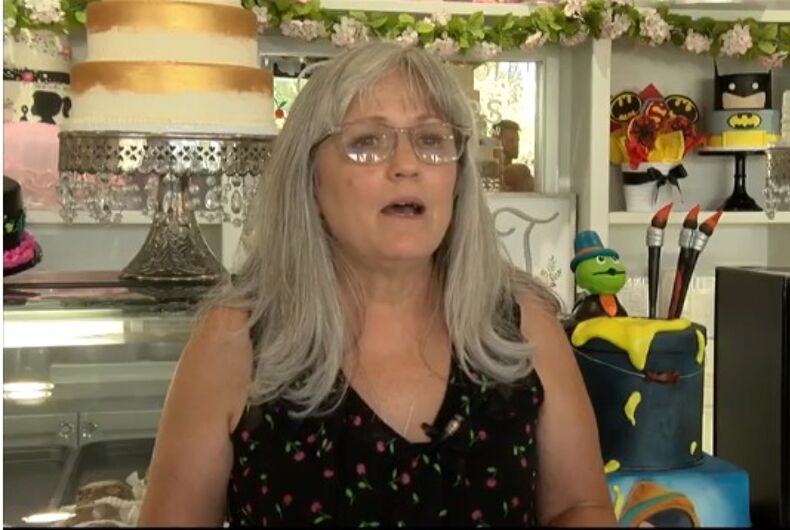 Cathy Miller, owner of Tastries Bakery in California, is being sued by the state for discriminating against gay couples.Photo: Screenshot/KGET 17

The state of California has sued a Bakersfield bakery for discriminating against same-sex couples.

The Department of Fair Employment and Housing attempted to block Cathy Miller, owner of Tastries Bakery, on Dec. 13 from continuing to deny to serve LGBTQ people, with a temporary restraining order. Kern County Superior Court Judge David Lampe rejected that attempt, but set hearing for Feb. 2.

It could result in Miller having to make wedding cakes for same-sex couples, or stop making them altogether, reports The Bakersfield Californian.

Miller is said to have refused to make a wedding cake for lesbian couple Eileen and Mireya Rodriguez-Del Rio, in conflict with state nondiscrimination laws, citing her Christian beliefs. When they shared their story on Facebook, it led to another same-sex couple coming forward to say they too had been denied a cake for being gay.

In fact, Miller admits that she has been doing so for five years. Still, she sees herself as the victim.

“I’m really hurt by this,” she told the local NBC affiliate. “I don’t think we should be picked on because of our beliefs.”

Judge Lampe has sent Miller a questionnaire about her business practices, including detailed personal and employment information, according to Daniel Piedra, executive director of the Freedom of Conscience Defense Fund, who is defending her. He said the judge feels that both sides have legitimate legal concerns that must be heard.

The case is drawing natural comparisons to one before the U.S. Supreme Court, Masterpiece Cakeshop v. Colorado Civil Rights Commission. That case involves another baker who refused to make cakes for same-sex couples.

“California respects and celebrates diverse religious beliefs and freedom of speech, but does not create exceptions to its civil rights laws to allow businesses to discriminate on the basis of sexual orientation,” said Kevin Kish, director of the Department of Fair Employment and Housing.

“After a careful review of the preliminary facts, DFEH concluded that legal intervention was warranted to ensure equal access to services and prevent harm resulting from discrimination until our investigation is complete. We will appear in court on Feb. 2 in compliance with the judge’s ruling.”