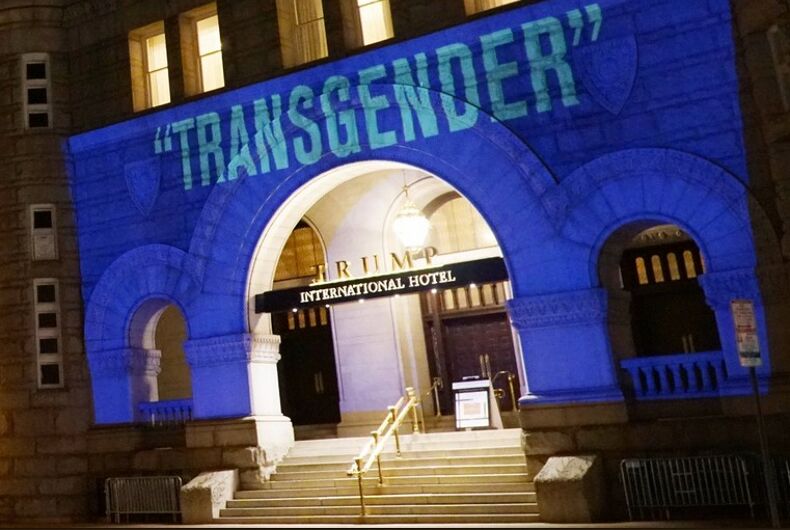 Last week, analysts at the Centers for Disease Control and Prevention (CDC) were told to stop using seven words in official papers, including the word “transgender.”

HRC found a creative way to get Donald Trump’s attention: they projected the words on the Trump International Hotel in Washington, DC, last night.

.@HRC protested tonight in a display projected on @realDonaldTrump’s DC Hotel. The projection rotated words Trump-Pence administration has reportedly banned at the CDC and ended with a declaration from the #LGBTQ community.

The seven politically incorrect words were “transgender,” “vulnerable,” “entitlement,” “diversity,” “fetus,” “evidence-based,” and “science-based.” HRC also projected “We will not be silenced.”

The organization has also filed a request under the Freedom of Information Act to find any records related to the banned words.

On Friday, the Washington Post reported that analysts were told by a representative of the CDC’s Office of Financial Services that they should avoid using these words in official documents supporting their budget. The representative said that draft budgets had been sent back by the White House with those words circled for “correction.”

On Monday, CDC Director Brenda Fitzgerald told Politico that there are no banned words, and a spokesperson for the Department of Health and Human Services said that it was a “complete mischaracterization” to say that the words were banned. The New York Times reported that CDC officials said that instead of a “ban,” it was “a budget strategy to get funded” because Republicans control Congress.

Which is the same thing. Whether Republicans are directly ordering the CDC to stop using those words or have just made the CDC understand that their funding is at risk if they use those words, the effect is that those words are being avoided.

Republicans know that there is power in controlling language. It’s harder to advocate for funding for programs that help transgender people without using the word “transgender,” just like calling a fetus an “unborn child” makes advocating for choice more difficult.

This gay priest came out at mass & got a standing ovation

Did the Trump administration lie to the courts about its ability to accept trans recruits?