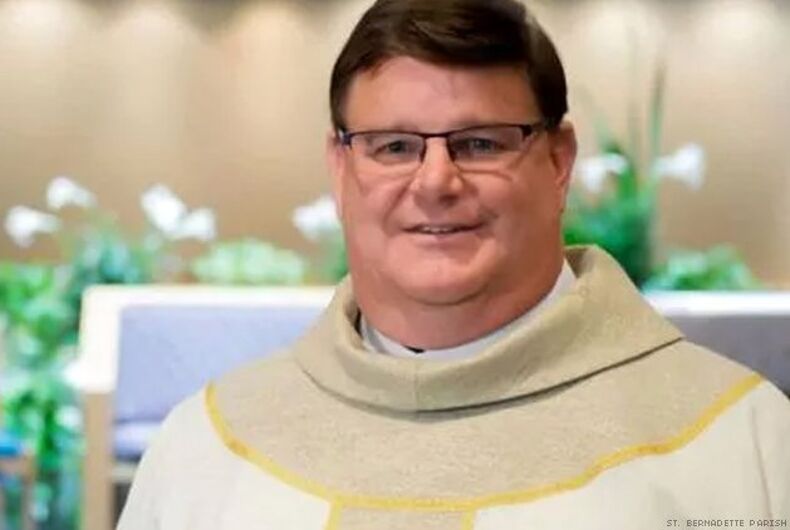 On Sunday, a Catholic priest came out to his congregation and got a standing ovation.

Father Gregory Greiten of the St. Bernadette Parish in Milwaukee said this past Sunday, “I am Greg. I am a Roman Catholic priest. And, yes, I am gay.”

The Milwaukee Journal-Sentinel reports that he got a standing ovation.

Before coming out publicly, he talked to Milwaukee Archbishop Jerome Listecki, who supported him. “We support Father Greiten in his own, personal journey and telling his story of coming to understand and live with his sexual orientation,” he wrote in a statement.

But that statement was also used to remind gay and lesbian Catholics that they – unlike straight people – are expected to remain celibate. “Greg’s own story reminds each of us of God’s call to continue to grow in understanding and to live holy, chaste lives,” the statement said.

On Monday, a column by Greiten was published in the National Catholic Registry where he described his coming out process.

When he was in high school seminary, a friar led what Greiten called an “inquisition” into the sexual relationships of the boys at the school. Boys with “particular friendships” were kicked out because they had “family problems.”

“It was evident that the leadership wanted everything to be swept under the carpet and to ensure that nothing would ever be leaked out,” Greiten wrote. “It was in this secretive environment that I grew up.”

He accepted that he was gay when he was 24, but kept it a secret for years because he loved his job.

For Greiten himself, the result isn’t really unfair: all priests are expected to be celibate, no matter their sexuality.

For the laity, though, the unfairness is stark. Gay and lesbian Catholics are expected to be celibate too, while straight Catholics aren’t.

Greiten writes that the lack of LGBT role models in the Catholic Church “only perpetuates the toxic shaming and systemic secrecy.”

How much better it is for people struggling to come to terms with their sexualities to have a role model in their church who is only accepted because everyone believes he’s celibate? The idea that someone’s sexuality and love is so terrible that it has to be repressed is itself toxic, even if it is communicated with a smiling face instead of an inquisition.

An LGBTQ group trolled Trump at his own hotel