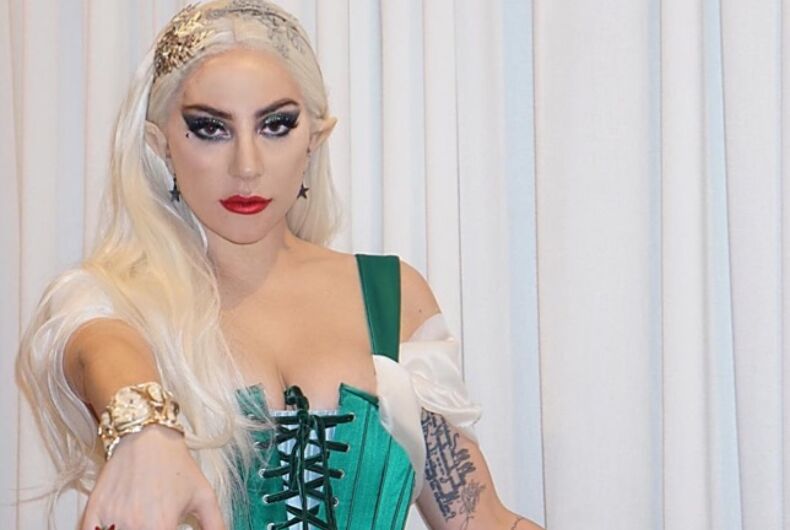 Never one to shy away from a little publicity, singer/actress/style/queer icon Lady Gaga has slipped into yet another one of her famed ridiculous outfits, this time in celebration of the holiday season.

Gaga, real name Stefani Germanotta, appeared at the Haus of Gaga holiday party sporting a new look to coordinate with the holiday season… or to audition for a community theatre production of Lord of the Rings.

Are you on the naughty or nice list this year? #holiday #holidayparty #merrychristmas #happyholidays #naughty #nice #ladygaga #gaga

Gaga appeared in a satin green corset, red and white striped stockings, and a pair of latex pointed ears. Her outfit, made to channel one of Santa’s elves, also drew comparisons to the titular character in the Legend of Zelda video game series. She also appeared alongside her sister, who dressed in a sexy Mrs. Claus outfit. We’re not sure what, if anything, that says about their relationship.

Happy Holidays from the #HausOfGaga. We love you and wish you lots of cheers and no tears! 🎄🎅🤶 #holiday #ladygaga #gaga #party photo by @alex.j.dolan

Gaga’s look and photos from the party lit up Instagram, igniting a tweet firestorm from her most devoted fans. Most lauded her ensemble, even if they found the overall effect somewhat ridiculous. After all, with Lady Gaga, that’s often the point.

No word on if the singer has made a temporary home on a shelf.

How black women saved us from Roy Moore

Why is this lesbian trying to overturn marriage equality?