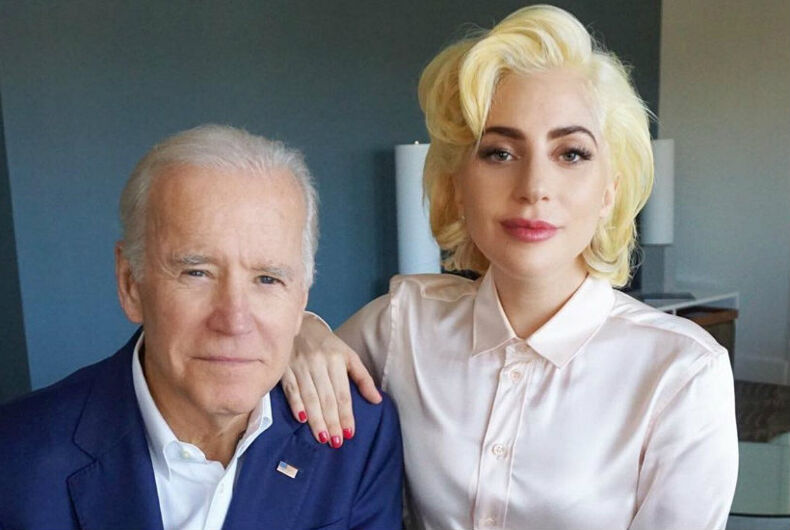 Joe Biden and Lady Gaga in a new video speaking out against sexual assault and speaking up for survivors. Photo: Twitter

Lady Gaga and former vice president Joe Biden have teamed up for a new PSA video encouraging everyone to stand up for survivors of sexual assault, and to stand up against predators.

Former president Barack Obama and Biden created the “It’s On Us” campaign to help end sexual assault on college campuses. The efforts to empower the Office of Civil Rights to assist in these cases has since been rolled back by the Trump administration.

He refers to her song “Till It Happens To You,” which deals with sexual assault, and was written for the film The Hunting Ground.

“Well, it happened to her,” he continues, “and she’s shown enormous courage. And we want to make it real clear, it’s on us, it’s on everyone to intervene, to stop abuse when they see it and when they hear about it.”

“I am a sexual assault survivor, and I know the effects, the aftermath, the trauma, psychological, physical, mental,” she continues. “It can be terrifying waking up every day feeling unsafe in your own body.”

“But we’re here to remind you that it’s important to reach out to someone in your life that you can trust, and to know that they will be there to help you,” she continues. “There will be someone there to listen.”

Statistics show the LGBTQ community is at an increased risk for sexual assault.

A message from me & my buddy Vice President @JoeBiden @ItsOnUs to stop sexual assault. Go to https://t.co/aMd5silSst #ItsOnUs to help. 🇺🇸 pic.twitter.com/w5JGRCd2z8

This drag queen’s impersonations of famous celebrities will amaze you

App wars: Jack’d goes on the offensive against Grindr over racist profiles