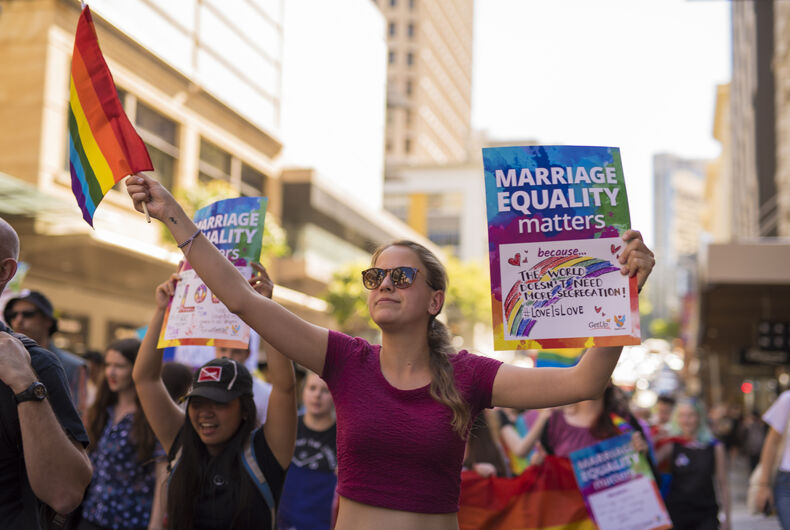 No use pretending that 2017 was a terrific year. Just two words: President Trump, and everything that implies, from anti-gay appointees to transphobic policies. But it’s easy to overlook the positive trends that emerged in the past year – in part a reaction to Trump. Call it the counter revolution.

Here’s the third in our year-in-review series, Silver Linings 2017.

Millennials are overwhelmingly pro-marriage equality, while the most hard-core opponents are in their 70s and 80s.

More than two years after the Supreme Court made marriage equality a national right, public opinion keeps consolidating in its favor. A Pew survey released last June found 62% of Americans support the right to marry. For the first time, a majority of Baby Boomers and African-Americans surveyed said that they were okay with same-sex marriages.

But the real news is that the Millennials show massive support for marriage equality. Nearly three-quarters are in favor of marriage equality, a number that keeps growing with each new survey. Contrast that with the 49% of people in their 70s and 80s who oppose same-sex marriage. What the numbers say is that with time, opposition will erode even more as those who dislike same-sex marriage go to their final reward.

As in the public as a whole, younger evangelicals have tended to be more supportive of same-sex marriage than their older counterparts. But the generational divide among white evangelicals is now wider than in past years.

Even more important, though, is the fact that even young evangelicals are more likely to support marriage equality than not. Nearly half in the survey said that they believed same-sex marriage should be legal. Only about a quarter of older evangelicals agree.

Opposition to marriage equality is one of the core issues for the current evangelical leadership, but now there’s reason to believe that attitude won’t survive a generational change. It can’t come soon enough.

Lesbian family viciously slaughtered in their own home at Christmas