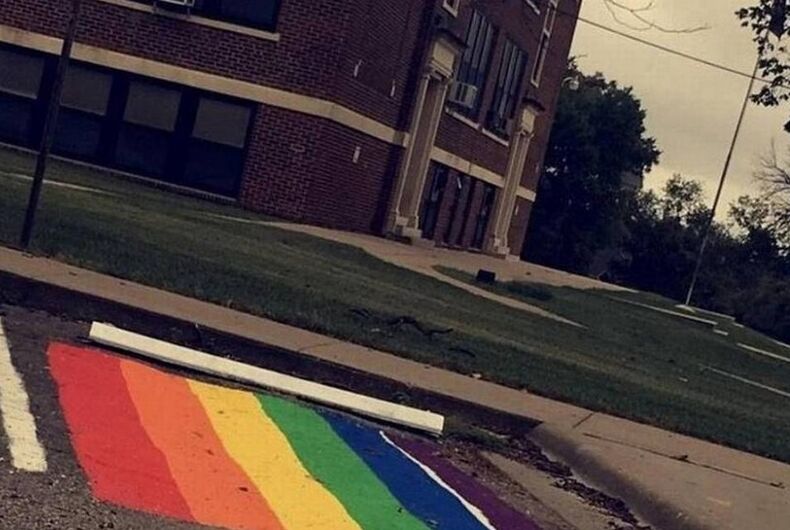 A school board in Kansas voted to end a tradition in which seniors paint a parking spot after conservatives complained a student who painted a rainbow flag.

For several years, seniors at Marion High School in rural Kansas have been allowed to paint a parking spot, and they can choose a design that expresses themselves. Logan Waner, 17, painted a rainbow flag.

“I mostly chose to paint the flag because it’s simple enough and I’m a horrible artist,” he said on Facebook. “It described me well enough, so it just felt right.”

The paint wasn’t even dry before complaints started to come in to the school.

In late September, Principal Tod Gordon met with Waner and suggested changing his design. This upset the senior and he posted about it on Facebook, but Gordon said that he only suggested changing the design to protect Waner from controversy.

“I wasn’t trying to change it because of the design,” Gordon told the Marion County Record. “I just didn’t want him to be subject to any extra attention, that’s what I was trying to avoid.”

He explained that there are no written rules about what students can paint, but that “controversial” designs have to be removed.

In previous years, a Confederate flag was painted without controversy, according to Waner’s friend Miran Stephenson. Other spots this year had Bible verses, crosses, and Donald Trump’s slogan “Make America Great Again.”

Tensions escalated several days later when a vandal covered the rainbow with tar and black paint. Fortunately, Warner had a lot of support from his fellow students.

“Almost everyone in the school is helping him (clean it),” Stephenson told the Wichita Eagle. “The principal went out with a power washer. I’m just really happy that everyone is helping. It just show him the support he needs.”

The controversy continued as Marion County resident Chuck Seifert parked his car over the spot during homecoming weekend to keep people from seeing the rainbow.

In October, Seifert attended a school board meeting to complain about the flag.

“Just so you all know, I’m going to be here at school board meetings until I hear you have done something to that,” Seifert said. “I think it needs to be done, it’s bad enough we have to see it on TV every night.”

“I don’t know why somewhere we don’t stand up at the lowest form of government here, not demeaning anybody, but this is the lowest form of government in our country, is the school board,” he said. “Somewhere’s we got to stand up. They’ve taken us over, and if we don’t stand up, we’re almost a socialist nation now, and we’re getting worse every day.”

“I am not a hater, I have no problem with people, I just don’t like it thrown in my face,” Seifert added.

That meeting ended without a decision.

The controversy continued, with even the Westboro Baptist Church protesting at the school. There were more counter-protestors than protestors, and Waner kissed a boy at the counter-protest.

At a board meeting last week, Superintendent Aaron Homburg brought up the issue again, saying that the school board should do something about the “ambiguous” situation. The board voted 4-3 to end the practice of painting spaces altogether.

Board member Jeremiah Lange voted against the ban.

“My part was, I thought the timing was bad because we just had the folks from Westboro and people might think it was because of that,” he told the Marion County Record.

Waner, for his part, said that the school board was wrong to ban the tradition.

“I really don’t know what to say, but I guess congrats to the school board for taking away their students’ freedom of expression and originality,” he said.

“But I haven’t been blamed for the decision. I think all the blame is going toward the school board.”