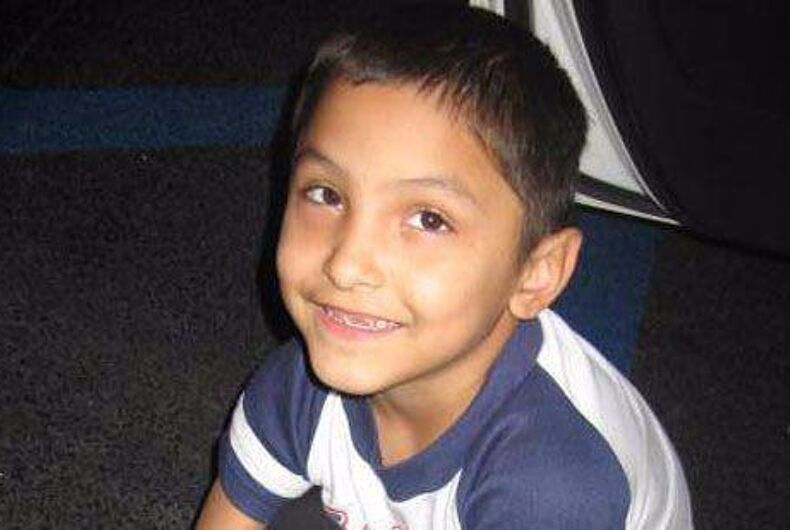 A jury in California recommended the death penalty to a man who was convicted of killing an 8-year-old boy for being gay.

Isauro Aguirre was found guilty of first degree murder in the death of his girlfriend Pearl Sinthia Fernandez’s son Gabriel Fernandez. The boy was found in May, 2013, with a cracked skull, broken ribs, and burns, and died days after being hospitalized.

During closing arguments in the penalty phase of the trial, District Attorney Jonathan Hatami told the jury, “No human with a heart and soul could do that to an innocent little boy.”

He asked the jury to “show the defendant the exact same mercy he showed Gabriel.”

Aguirre’s public defender John Alan asked the jury for mercy and to give Aguirre life in prison.

Several people at a retirement home where Aguirre worked testified that they hoped his life would be spared. Alan said that they knew him to be “gentle, kind, patient, respectful.” One juror shook her head when he said that.

The jury deliberated for seven hours before returning with a recommendation for the death penalty.

Gabriel was brutally tortured by his mother and her boyfriend. Jurors heard from his siblings how he was beaten daily, pepper-sprayed, kept in a cage, forced to eat cat feces, and once hit so hard that his head left an indentation in the wall. Forensic testing found his blood all over the family’s home.

His siblings said that their mother and Aguirre would often call Gabriel gay because he liked to play with dolls.

One of the jurors told the LA Times after the trial that she had trouble sleeping during the trial because of the images she was shown. She said that the death penalty was not “enough justice.”

The mother is also being prosecuted for murder. Several Los Angeles County social workers have been charged with criminal negligence for leaving Gabriel in the home despite six investigations that showed, according to the judge, that “red flags were everywhere.”

Aguirre will be sentenced in March.

A men’s barbershop refused to serve a trans man

Conservatives freaked out over a student’s rainbow. So his school ended a tradition.